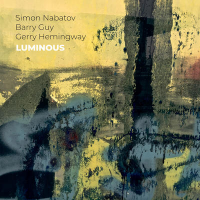 Pianist Simon Nabatov, bassist Barry Guy and drummer Gerry Hemingway share many characteristics. All three serve as outstanding leaders in their own right, but also happen to be superlative improvisers. That latter trait that brings them together for the first time in an egalitarian summit on Luminous. This threesome was one of four new trios convened by Nabatov in 2015 as part of a project ..."still crazy after all these years" to celebrate his quarter century in the German city of Cologne. What ensues is a program of a dozen richly-detailed collective inventions. Recorded over two days in the city's famed LOFT venue, they are crammed with events, constant adjustment and inspired modulation.

"Slip Away" provides just the first example of the intuitive interplay revisited in multiple guises across the 77-minute set. The track begins in nervy, edgy exchanges full of spiky edges derived from Hemingway's stuttery percussive pulse. Guy shifts between upper register plucks, resonant depths and scratchy bowing so deftly that it seems as if there are at least two bassists on the case. Nabatov rides among the resultant currents in a stream of notes with the independence of his hands adding complexity. To offset the intensity, the track ends with a lovely sequence of bass slurs sliding down the fingerboard, cosseted by exquisite piano.

"Basket Glide," with Hemingway's marimba prominent, conjures images of droplets, ripples and slowly flowing rivers, demonstrating the trio's ongoing attention to sound placement, dynamics and variation. Brief consonances, like marimba and piano echoing a phrase, give listeners something to hang onto before paths diverge once more. This cut, like many others, contains a satisfyingly reflective coda that clears the air after the peppery give-and-take. It is the same in "Vacant Prophecy," another crenulated excursion, with Nabatov now extemporizing a dramatic melody, making it a shoo-in for airplay if such a choice were needed.

Elsewhere the trio also explores delicate harmonics and reverberation, as in the fragile, tinkling "Shards Examined" and "Great Disparity"—although the latter morphs from high arco glissandos into bold interchange and breathless dash. "Scroll Back" moves from density to utmost transparency via airy percussion, metal rods vibrating between the bass's strings, and strikes onto the piano's innards. A nod to the conventional piano trio doesn't surface until the final "Unfrozen Sorrow," although even there the energy mounts through fast uncoiling lines and involved attack. This first-time meeting begs for a follow-up.