By Glenn Astarita
August 26, 2013
Sign in to view read count 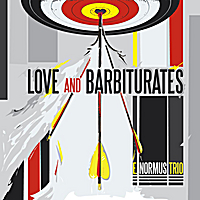 These Asheville, NC musicians started collaborating in 2007, leading to this debut release that skirts the boundaries of jazz-rock, free-jazz and progressive metal-jazz. The jazz and improvisational elements accentuate most of these works, fueled by adrenaline rushes amid the trio's broad arsenal.

Excitable but largely cohesive, lead soloist and clarinetist Steve Alsford bridges torrid breakdowns with wily phrasings and wistfully melodic sentiment. Meanwhile, Jay Sanders uses a N/S Stick, an 8-string multipurpose instrument that affords him the ability to play bass and guitar in concurrent or alternating fashion. Therefore, the band rocks on with titanium-enforced durability via changeable patterns and unanticipated detours.

It's all been done before in various ways, shapes and forms, but this band integrates numerous genre-based inferences into its repertoire. With asymmetrical doses of swing, rock, and Sanders' fuzzed-out psycho guitar licks, the music generates remembrances of New York City's vibrant downtown scene, at times drawing comparisons to John Zorn's Naked City ensemble. However, the trio doesn't abide by a staid methodology. Other than executing tricky time signatures, for example, they shift gears on "Clara," where Sanders explores the lower registers, offset by shifting metrics and upbeat balladry.

"The Long Boots of Age" rings like a metal-blues bash via Sanders' wailing lines, but they temper the flow with an odd-metered, one-note unison vamp as drummer Michael W. Davis launches a polyrhythmic tirade and raises the pitch. Here, the band counterbalances a feeding frenzy with softly woven innocence, and is a consistent paradigm throughout the program. Hence, it doesn't work within one particular formula, yet maintains a distinct group-centric persona. And on "Maxwell's Demon," the group activates a bubbly electronics ostinato as a backdrop for Alsford's blithe lines to formulate an unpretentious space-jazz ditty. To that end, Asheville, NC, has emerged as a mini- mecca for art and music. With this idiosyncratically titled outing, the trio pushes the envelope while yielding substantial rewards, executed with cleverness and impressive technical faculties.