Hayes savors the moment by quietly going back to the drums. He's in no hurry to break down the set and leave. For just a few more minutes the realities of the world outside can wait. 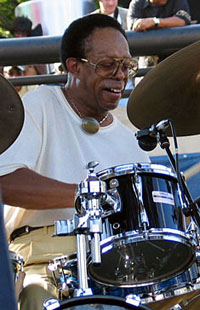 Housed in the rear of a nondescript building on a busy northern New Jersey thoroughfare, Showplace Studios is a no frills workspace nearly devoid of worldly distractions. The Showplace consists of an office, a small lounge, a control room, and studio. Regardless of where you are in the compact area, everything is just a few steps away. Before the musicians arrive to begin the day's recording, the place is silent except for the low drone of the recording machinery. The only sign of life is a small TV in the lounge turned to CNN with the sound off.

The leader of today's session, the venerable drummer Louis Hayes, is the first to appear. His vehicle's GPS system and a phone call saved him from getting lost in the suburban sprawl. A couple of longtime band members, tenor saxophonist Abraham Burton and bassist Santi DeBriano are the next to arrive. Before entering they share a joke about the Gentlemen's club on the other side of the building.

For the better part of an hour the studio is a beehive of overlapping preparations. Burton warms up by playing some long searching phrases. The Showplace's owner and engineer, Ben Elliott, takes off his coat and instructs assistant Ben Sampson to make adjustments to the piano mike. A few feet away, DeBriano and Hayes sing the head of one of the tunes they'll record later. Burton talks about one of his compositions, describing it as "like a ballad—just that vibe." As Hayes looks on, pianist Helio Alves and Burton begin to rehearse another tune. Jack Kreisberg, who has produced dozens of discs at the Showplace and is in charge of today's session, walks in and surveys the scene. "Everyone's here but Steve," Hayes says to no one in particular. As if on cue, guest artist Steve Nelson brings his vibes in from the rain soaked parking lot, one piece at a time. "Not everyone has to solo on every tune," Kreisberg says. "I want to keep it to five minutes per track."

Taking up most of the studio's area, the band's set-up resembles an obstacle course. The players are spread out at odd angles, several feet apart. Hayes's drums and cymbals are against the rear wall. DeBriano and Burton are housed in isolation booths in the room's corners where they can hear (with the aid of headphones) but can't see each other. Alves's piano takes up a good chunk of the studio's middle, and he sits with his back to DeBriano. Nelson and his vibes are close to another wall, behind some waist-high sound barriers.

Separated from the studio by a thick pane of glass, the control room is a world of its own. The recording board takes up the entire length of the room. There's a narrow isle and another row of related equipment. As the musicians continue to warm up and go through the tunes, Elliott manipulates several of the board's faders and isolates sounds from various parts of the studio. Sampson mentions that Nelson needs both mikes to register in his head set. Elliott looks intently at the board as if seeking answers to problems only he can anticipate.

In the studio everything is getting more focused and you can sense that they're ready to test the sound level of Alves's "Double Rainbow." Hayes counts off a medium-to-up tempo in three-four time and then, almost immediately, brings things to a halt. DeBriano can't hear everyone else through his headset. After quizzing Sampson about the kind of headset the bassist is using, Elliott reaches back to the rear panel of equipment and makes some adjustments. The band starts again. Nelson's introduction is bolstered by Hayes's hard accents and boisterous fills. Burton's statement of the melody leads to Alves's solo. Though the band is still playing, for a few seconds in the control room you can only hear Hayes's bass drum. Satisfied with the drum's sound, Elliott makes another adjustment and everyone is audible once again. The take ends with Hayes's shuffle beat over a vamp amidst Burton's mellow asides.

The band crowds into the control room for the playback. Elliott asks Hayes if there's too much ping on the ride cymbal. Hayes replies that it's just fine. They all return to the studio for the first real take. Hayes sounds even bolder than before and the band responds in kind. After they finish a brief debate ensues. Is this "The take?" Kreisberg points out that a nine minute track has little chance at radio airplay. DeBriano half-jokingly says, "Tell them to shove it. You're Louis Hayes." They try it again and play a strong take in less time.

Horace Silver's classic composition "Peace" is taken as a brisk bossa nova. Hayes leads the way with an introduction comprised of time on a semi-open hi-hat and rim knocks to the snare. The first take features short solos by Burton, Alves, and DeBriano, using the bow. Hayes thinks something is missing and suggests that Nelson add some bebop touches to the melody—"However you feel it." His idea pays off when Nelson's additional edge is contagious and the band plays with considerably more energy.

DeBriano and Alves engage in a brief hallway discussion on the length of tracks on jazz radio. DeBriano opines that recording length should reflect how musicians play in live performances and not be held to some artificial standard. They return to the studio and start working on DeBriano's "Save Yourself." As the composer explains some fine points to Nelson, both Burton and Alves read off of their lead sheets. From the control room Kreisberg briefly comments on the tune's difficulty. It's a rather complex bebop line featuring Burton playing the melody over a busy, leaping piano figure. The second take generates laughter and hugs in the control room. Still they decide to go for one more. Afterword during the playback Hayes stomps his foot in approval of Nelson's solo and exclaims, "That's it."

While the others practice the head of Horace Silver's "The Preacher," Hayes and DeBriano together count off a medium tempo. DeBriano moves to the piano where he picks out the bass notes while Alves outlines the tune. Hayes quietly plays a variation of a shuffle rhythm on the hi-hat cymbal. DeBriano asks Hayes, "Should we keep the feeling of the head, or start walking on the solos?" "Walking," Hayes replies. The third take is enlivened by Hayes's snare drum accents during Silver's melody and exacting solos by Burton, Nelson, and DeBriano. After they finish Nelson declares, "Nobody plays that tune. It's bad." Hayes points at Kreisberg and says, "Jack gave me the idea." "That was a nice tune to put on the record. I like it, Jack," DeBriano adds. Nelson's work for the day is done, and he leaves the studio visibly excited about recording with Hayes.

Burton's "Abellino" proves to be the biggest challenge of the session. The band rehearses for over an hour on a composition which moves back and forth between a brisk vamp in seven-four and a slow line in three-four time. Hayes sits at the drums, quietly watching his sidemen run down the tune, then starts to peck at the ride cymbal and works in a tom-tom rhythm. "Lou, you're going to be blowing over the vamp," Burton announces. There's a brief debate over the merits of deliberately counting out the time signature changes versus just feeling them. Hayes turns the snares off and elects to play the head using a mallet in his left hand and a stick in the right. They nail the second take as Hayes's two mallet solo is accompanied by Burton's hard, abbreviated phrases.

Another Burton original, "It's Up To You," a straight-ahead, medium-to-up tempo line, requires little preparation. The tenor saxophonist briefly outlines the tune and then they're off and running. Hayes's tom-toms animate Alves's razor sharp single note lines, Burton plays a keen hard-bop tenor, and DeBriano's solo works its way nicely back to the head. Not entirely satisfied, the bassist comments that "I keep thinking about all of the things I would have liked to have done on that solo."

A staple of the band's book, Riley Mullins's "Dear Lou" is a brisk samba with a swaying bridge that feels like the tempo's been cut in half. Hayes's punchy accompaniment behind Burton is ruthless and economical. DeBriano's whole body bounces when he plays. Hayes executes subtle, regularly placed snare drum accents during Alves's turn. As the band comes down in volume during the out head he spreads out long, fluid buzz strokes to the snare.

In a brief break Hayes talks about not being content to rest on past accomplishments. He's grateful for the work yet is leery of being typecast as someone who only leads groups in tribute to his former employer Cannonball Adderley. Hayes looks at Kreisberg and expresses appreciation for the opportunity to record both new and familiar material with a working band.

Co-written by Mullins and Hayes, "Check In" is another tune that's familiar to the group. After a brief discussion about the solo order DeBriano suggests that immediately after the head Hayes trade eights with Burton. It's another way of presenting the drummer's prodigious talents as a soloist. Seven-and-a-half hours into the session, Hayes, who turns seventy-one at the end of the month, is still going strong, playing with the energy of a man half his years.

In the control room Kreisberg says he's happy with the day's work and there's enough material for an excellent record. However, the band's on a roll and they want to do one more track. Alves briefly runs down an arrangement of the standard "Angel Eyes" for Hayes, and as the tape rolls the drummer counts off a tempo. Hayes's stunning solo goes in and out of time with rumbling tom-tom interludes and flashy trips around the drums. Burton takes the tune out and Alves aggressively pursues him with chords and single note lines. When they're finished there's laughter and a palpable sense of relief. "That was hot," declares DeBriano. Still, Hayes isn't satisfied with the ending and the band records an abbreviated version that Elliott attaches to the existing track.

The band members pack up their instruments, talk about plans for the night, casually discuss upcoming gigs, and express satisfaction with the results of the long session. Hayes savors the moment by quietly going back to the drums. He's in no hurry to break down the set and leave. For just a few more minutes the realities of the world outside can wait.