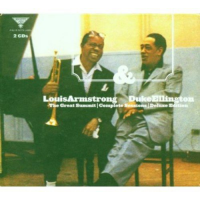 Could it be that two of the greatest geniuses contributing to the development of jazz music were born a mere year apart? Yes, it could be. No, it may not be.

Well, it depends on the legitimacy of a birth and the authenticity of records. Louis Armstrong, not knowing his actual birth date and unabashedly proud of his native country, asserted that he was born on July 4, 1900. A baptismal certificate discovered years after that assertion shows Armstrong's birth date to be August 4, 1901. We may be celebrating the Pops centennial a year early.

Whatever the coincidence or lack thereof, jazz listeners were fortunate when Armstrong's and Ellington's paths crossed in an RCA Victor recording studio in 1961, thanks to producer Bob Thiele's influence. And jazz listeners are doubly fortunate that devoted jazz re-issue producer Michael Cuscuna found the out-takes from those sessions. The result is that listeners can be a fly on the wall during the creative process as the two kind-of centeniarians develop the final recorded tracks that the public heard on the original Roulette recordings. Full of starts, stops, comments, observations, self-criticisms and laughter, each track listing on Disk 2, "The Making Of The Great Summit," consists not only of a polished performance, but also of the bumps along the way.

Such completism, and such packaging, give the listener a choice: Either listen to the out-takes and then revel in the final product, or listen to "The Great Summit: The Master Takes" (Disk 1) and then learn the process through which the rough edges were trimmed in the attainment of a legendary recording.

With a stripped-down band, instead of Ellington's orchestra or Armstrong's All Stars, we have a chance to appreciate the individuality of each of the masters. Not to mention the significance of Ellington's reunion with Barney Bigard. Or Armstrong's ease with the support of his trombonist Trummy Young.

Too often known as a band leader, Ellington reinforces the impression that he was one of the leading pianists in jazz when he stepped away from his orchestra. Too often known as a trumpeter, Armstrong reinforces the impression that he was the ultimate source of scat singing and jazz vocalizing. On "It Don't Mean A Thing," one can hear the scat licks that have become standard in successive generations as Armstrong sings them as a natural extension of his personality.

In this, the hundredth, or maybe ninety-ninth, year after his birth, Louis Armstrong is undergoing a rediscovery as wide-ranging as Ellington's was last year. Watch for further releases on Columbia, Verve, Decca and BMG. Check out his massive discography at http://www.satchography.com.

But it's doubtful that any of the re-issues will give as much insight into the thought processes of two of America's greatest jazz legends as does Roulette's "Louis Armstrong & Duke Ellington: The Great Summit, Complete Sessions."

Disk 1: Duke's Place, I'm Just A Lucky So And So, Cottontail, Mood Indigo, Do Nothin' Till You Hear From Me, The Beautiful American, Black And Tan Fantasy, Drop Me Off In Harlem, The Mooche, In A Mellow Tone, It Don't Mean A Thing, Solitude, Don't Get Around Much Anymore, I'm Beginning To See The Light, Just Squeeze Me, I Got It Bad, Azalea

Disk 2: In A Mellow Tone, I'm Beginning To See The Light, Do Nothin' Till You Hear From Me, Don't Get Around Much Anymore, Duke's Place, Drop Me Off In Harlem, I'm Just A Lucky So And So, Azalea, Black And Tan Fantasy, Band Discussion On Cottontail