BY MARC DAVIS
November 2, 2015
Sign in to view read count

True, Donaldson’s later soul-jazz records have a sameness to them. But Blues Walk is bop and blues at its best. 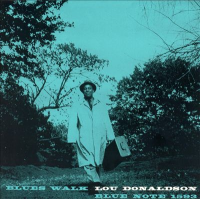 There's a tendency among some jazz purists to poo-poo Lou Donaldson. Not flashy enough, they say. Not groundbreaking. Too bluesy, too simple. Predictable. Derivative. A notch below the best Blue Note saxmen. A craftsman, not an artist.

Aw phooey! I like Lou Donaldson and I don't mind anyone knowing.

It has always been a mystery to me why certain jazz artists get tagged as simplistic and not quite jazzy enough. Dave Brubeck got that a lot. So did Ahmad Jamal and Vince Guaraldi. As if being popular were a curse on an artist's jazz chops.

In the case of Lou Donaldson, this is compounded by two mortal sins. First, he was a founding father of soul-jazz, a genre that some hard-core boppers disdain. Second, he stayed around Blue Note too long—recording dozens of albums for the label from 1952 to 1974, with diminishing returns. He had a formula and he stuck with it, critics be damned.

It's true, Donaldson's later soul-jazz records have a sameness to them. 1967's Alligator Bogaloo was a classic, but it was downhill from there. And even some of Donaldson's 1950s and '60s bop records—as a leader and as a supporting player—lack originality.

But not Blues Walk. This is bop and blues at its best.

The album starts with the title track, as soulful and bluesy as any jazz record could be. It's relaxed—hence the title—and even occasionally playful. Donaldson sticks to his trademarked swirling, smoky blues-flavored solos. Pianist Herman Foster chips in some nice down-and-dirty solo licks. And finally the percussionists—Dave Bailey on drums and Ray Barretto on congas (yes—drums AND congas!)—trade slow, soulful phrases. Nothing showy, but "Blues Walk" (the song) is pure jazz-blues pleasure.

The mood shifts abruptly to classic bop on Track 2 with "Move," the same song immortalized by Miles Davis on Birth of the Cool just a year earlier. Anyone who thinks Lou Donaldson lacks fire in the belly should be forced to listen. Again, Foster adds a great piano solo and Barretto's congas take a speedy duet with Peck Morrison's bass. Tasty!

"The Masquerade is Over" is a conventional swing number, but it's Track 4—another original by Donaldson called "Play Ray"—that brings us back to the album's theme: a mid-tempo soul-blues. To me, it evokes the sound of a great jazz quintet playing at a small, smoky lounge at midnight. (Despite the title, Ray Barretto has only a small conga part—wonder why he called it "Play Ray"?)

The pace slows for the one and only ballad, "Autumn Nocturne," a beautiful tune. And finally, the band wraps up with the third Donaldson original: "Callin' All Cats," a nice bop number that proves, again, that the saxman will not be typecast. He can swing with the best.

I could listen to Blues Walk over and over—and sometimes I do. Is it groundbreaking? No. Does it color outside the lines of the classic 1950s Blue Note formula? Not really. But damn, it's a fine record—a fun record. It's a classic of the genre, and for that, Lou Donaldson doesn't get enough credit.