BY EDWARD BLANCO
November 2, 2015
Sign in to view read count 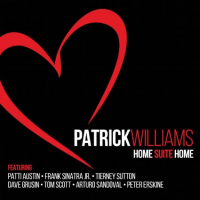 Composer, arranger and band leader Patrick Williams leads some of the finest jazz musicians in L.A. on another exciting portrait of big band swing on Home Suite Home, an album that's far more personal than all of his previous works. Documenting a personal homage to his family and his first musical love, Williams pays tribute to his children and wife stating "I tried to capture the essence of the personality of my wife and three children in musical terms...""is truly a labor of love." In addition to the all-star list of players on his band, Williams augments the group with vocalist's Patti Austin, Tierney Sutton and Frank Sinatra, Jr. gracing the stage with the likes of pianist Dave Grusin, trumpeter Arturo Sandoval, drummer Peter Erskine and long-time associate, saxophonist Tom Scott as special guests adding the final ingredients to his most ambitious and masterful musical project to date.

A prolific composer, the band leader offers eight original tunes leading off with "52nd & Broadway" featuring vocalist Austin fronting a full-on swinging orchestra. The tribute to his children is the center-piece of the disc and incorporated in the three-part suite beginning with his first homage, this time for daughter Elizabeth on "Home Suite Home I. Elizabeth (The Beautiful Scientist)" featuring sparkling solos from tenor men Scott and Bob Sheppard. "Home Suite Home II. Greer (The Dreamer)" is a far more subdued and humble piece of music highlighted by the sweet solos from Dan Higgins. The last homage, "Home Suite Home III. Patrick B. (The Real Deal) features a robust ensemble and showcases the chops of drummer Erskine, saxophonist Scott and trumpeter Michael Stever.

Williams pens the most ambitious track for his wife of 54 years dedicating "Blue Mist (For Catherine)" where trumpeter of note Sandoval leads the band on a delicate lush and introspective soft ballad conveying a warm message of love. One of the non-tribute pieces of the set that stands out here is, the swinging orchestral piece "I've Been Around" featuring a smart duet between vocalists Frank Sinatra Jr. and Tierney Sutton.

Aside from dedications to his family, Williams also includes a tip of the hat to trumpeter/composer and arranger Neal Hefti on "A Hefti Dose of Basie (To The Memory of Neal Hefti)" as the band dose a marvelous impersonation of the Basie orchestra featuring the stylish horn of trumpeter Stever taking the honors on lead. The last non-family tribute is a big band swinging chart entitled "That's Rich (For Buddy)" with various members of the band on solo excursions including drummer Erskine doing his best impersonation of the late great drummer Buddy Rich. When all is done, Patrick Williams' Home Suite Home, is far more than a tribute to family, friends and the music he loves, it's a tasteful creatively-designed flavor of big band swing performed with gusto that hits home.