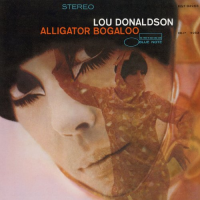 Alligator Bogaloo is very much a product of its time—1967—and it is extremely groovy.

Start with the cover. A woman with crazy eye makeup wears a nutty hijab-like getup and is waving her arms like an early-day Bangle walking like an Egyptian. Tres psychedelic.

Well, no surprise there. It's April 1967. The Summer of Love is about to begin. In two months, Sly and the Family Stone will burst into the public's consciousness and create modern funk. The Beatles' Sgt. Pepper is two months from blowing everyone's mind. And James Brown, the Godfather of Soul, is still making everyone feel good.

If there were a godfather of soul-jazz, Donaldson would be it. He was playing a funky alto sax long before Alligator Bogaloo, back in the hard-bop days of the 1950s, sometimes with Jimmy Smith on organ, and would continue in the same vein long after the fad had passed—probably way too long and way too monotonously.

But not here. Alligator Bogaloo (not boogaloo—go figure) is Lou Donaldson at the pinnacle of the jazz-soul era, with arguably the best and baddest example of the genre. Joining him are guitarist George Benson, still in his funky phase, before he turned soft and schmaltzy, and the ever-feisty Lonnie Smith on organ.

This is soul-jazz for people who love both.

"Alligator Bogaloo," the song, is a Donaldson original. It starts with a catchy, mod riff and continues with Donaldson's soulful sax solo. No hint of Charlie Parker, John Coltrane or Sonny Rollins here—just pure R&B boogeying. Melvin Lastie Sr. follows in the same vein on cornet, then Benson reminds you how good and bluesy he was before he sold out. Smith riffs and plays a nice solo to end the piece.

"One Cylinder" is, as the name implies, a one-chord riff. It's not very clever and, at almost seven minutes, it goes on too long. But it's more a slow, sensuous piece in the hard bop tradition, with more bluesy work by everyone, especially Benson and Donaldson.

And then we're back to pure R&B soul. "The Thang," another Donaldson original, with an irresistible riff and Smith smoking on the Hammond B-3, sounding very much like another, more famous organist named Smith. If you like Chuck Berry and James Brown, you'll like "The Thang."

"Aw Shucks!" is an original tune by Smith, delivering more wailing, slow soul-blues, followed by another Donaldson original, "Rev. Moses," which (as you might guess from the title) is more gospel than soul or bop. Finally, the ballad "I Want a Little Girl" takes us out.

You don't have to love the '60s to like Alligator Bogaloo, but it helps. It's about as fun and accessible as any album ever recorded by Blue Note.