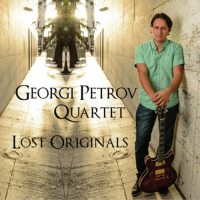 Georgi Petrov, a guitarist from Bulgaria, has been resident in the US for eight years, the last two in New Orleans.

His debut album, he says, "reflects a personal struggle with creating my own music and at the same time being sincere with myself. Artists come under great pressure to fit a certain framework and sometimes that makes you doubt yourself and your art. In a sense I feel lost and I am not secure that my original music is exactly what I want to say as an artist, hence the title, Lost Originals."

Such youthful insecurity is rarely reflected in his playing, which is remarkably self-assured and with no nervy, showy displays of technical fluency and speed.

Petrov's compositions are, likewise, considered and well thought out, and if the title track has a wistful, "little boy lost" quality to it, he no doubt intended it to be that way.

Petrov says of the next song, "France," most of which was written during a 2009 stay in Lyon: "The harmonies of the first section always made me think of Ravel or Debussy. The Impressionists were really fond of moving parallel minor chords that are not diatonically connected." One way or another, there is a dreamy but also—paradoxically—purposeful feel, accurately reflecting France's second city.

The stand-out number, "Like Lennie," was the result of Petrov studying and transcribing Lennie Tristano in college. "I was really fascinated with the Tristano school," he says. "Those guys were odd musicians who didn't fit the norm. They were really committed to creating their own sound and concept of how the music and improvisation had to be structured."

"Buddha Says" is another interesting track. Petrov says: "I am not a practicing Buddhist but I am quite involved in Buddhist philosophy. In a sense, this piece is a homage to John Coltrane since he epitomizes the artist I strive to be."

Doc Sharp's piano complements Petrov's improvisations seamlessly. Trey Boudreaux, on bass, is content to stay mostly in the background, although he does take a more prominent role on his own "Waking Lullaby," the closer. Petrov comes out of his shell on this one, with a fine, rocking solo unlikely to induce sleep.