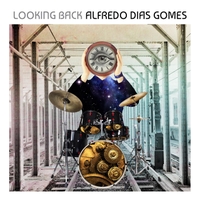 Alfredo Dias Gomes pays an exquisite homage to the greats that inspired him throughout his career in his album Looking Back, a labor of love to Chick Corea, Stanley Clarke, Billy Cobham, and more. His powerful drum beats match every saxophone note and guitar riff. Gomes also bravely adds his signature drum exhibitions to his heroes' works, making them more alive and pulsating.

"Red Baron" is like a melting pot of electrifying riffs, sizzling saxophone, and ferocious drum beats where everything is in sync, creating something splendid that would make Cobham proud. Guitarist Yuval Ben Lior, saxophonist Widor Santiago, and Gomes each have their own shining moments in the track. It's jazz fusion taken to a whole new level with each instrument showing off different intensities without overshadowing each other's unique sound.

"Nite Spite" begins with fast and feisty drumming that later merges effortlessly with energetic saxophone and emphatic riffs. Gomes masterfully demonstrates how he has sharpened his craft in this cover. His furious rhythms and inexplicable dynamics shows the depth and breadth of his talent. He makes this Corea original even more riveting and prodigious. Gomes remakes Weather Report's "A Remark You Made" with fluttering beats and sublime saxophone accompaniment. Rippling keyboards and saccharine guitars make this song sweeter than it already is. The entire track offers a suspension of disbelief where every scenario is ideal, romantic, and altogether dreamy.

"500 Miles" is an enthralling version of the Corea classic. A slow piece, it showcases the mesmerizing work of pianist Lulu Martin, whose command of the keyboard is impressive and every bit enchanting. Coupled with Santiago's saxophone and Gomes' drums, the result is a blissful song that is transcendent in rhythm and tune.

Gomes takes the creations of his muses and makes them his own. His collaboration with different artists shows that his talent can not only standalone but complement others as well. Gomes highlights the very elements that make these songs great before elevating their grandeur to new heights.