By GLENN ASTARITA
February 20, 2021
Sign in to view read count 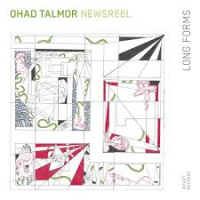 New York City-based tenor saxophonist, composer, arranger Ohad Talmor and associates provide all the 'jazz' news fit to hear on this superb effort, comprised of thorny time signatures, shifting detours and offbeat mini-grooves, enamored with the leader's whizzing solos and more goodness. Acclaimed due to his arrangements for the late sax great Lee Konitz and affiliations with top-shelf musicians on a global basis, Talmor's multidirectional works often proceed with a semblance of micro-suites, embedded with simmering, odd-metered passages, and fluctuating currents.

No doubt, the album prolongs interest via the band's flair for adventure. On "Casado," Jacob Sacks' diminished piano intro is coupled with Talmor's dreamy lines followed by trumpeter Shane Endsley's entry, segueing into a series of counterbalancing dialogues, melodic choruses and rather humble emotive aspects. Throughout, the musicians' symmetrical storylines and staggered progressions are contrasted with tight, unison phrasings and fluent performances. It doesn't take long to determine that Talmor is primarily concerned with imparting stellar compositional and arranging aspects, as the artists' improvisational fortitude takes its natural course, awash with spikes and valleys. Hence, the element of surprise is a recurring factor.

Warm and brooding horns with Matt Pavolka's poignant bass lines jumpstart the extended final track, "Musique Anodine." Here, drummer Dan Weiss' roundabout drum patterns, and the soloists' sublime voicings circumnavigate the primary theme. Attributes of a musical construction project come to mind, where the foundation is laid then the walls are installed as they raise the pitch with cascading motifs amid Talmor's animated and harmonious solo, executed with space in between. Eventually, the ensemble ups the ante with high heat, concocted with rising crescendos and decisiveness, leading to a clement finale. Nonetheless, it's a top 2020 pick that may have slipped through the cracks on a large-scale basis.