By Jerry D'Souza
September 7, 2007
Sign in to view read count 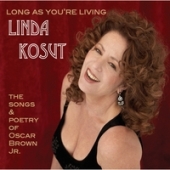 Singer Linda Kosut has admired the music of Oscar Brown Jr. from the time she first heard it in the 60s. In 2006, she turned his songs into a tribute on stage. Long As You're Living - The Songs & Poetry of Oscar Brown Jr. has been performed in San Francisco, New York, Los Angeles and Chicago.

Kosut has pulled some of the songs from Brown's repertoire for this CD. She has her own style, she never seeks to imitate or pay cloying tribute to him. She gives Brown's songs a fresh slant, which by and large makes this a pleasure to listen to.

Kosut has selected a wide range of songs that showcase her vocal ability. She is bang in the groove on "Bid 'Em In evocating the charged atmosphere of a slave auction which she sings a capella.

Brown's words focused not only on social issues but also on observations of everyday life. "Hazel's Hips gets its first undulation from Max Perkoff's piano. Kosut is slinky and sly in unraveling the blues. Perkoff returns for an appropriately greasy solo on the trombone. The slow burn of the blues and the saucy lyrics make this salivating.

A Tree and Me is awash in warmth. Kosut plumbs the depth of the emotion and comes up with a winning performance. "Mr. Kicks is quite a different bag. Upbeat and joyous, the song gives Kosut an opportunity to show her mettle as a jazz singer.

A Tree and Me; Mr. Kicks; Hazel