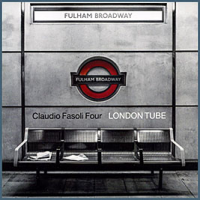 One of the pleasures of traveling to events abroad is the opportunity to learn about musicians who may be established at home, but are deserving of more attention abroad. Such was the case when covering the Fondazione Siena Summer Jazz Workshop 2013 in Siena, Italy, and the chance to experience saxophonist Claudio Fasoli, both in action as an instructor at the academy and at a very special performance by his Claudio Fasoli Four. London Tube is the quartet's second recording following 2011's Avenir (Caligola) and, like its predecessor, capitalizes on the strengths of a quartet of exceptional players that deserve wider recognition.

Fasoli has been a fixture on the Italian scene since the 1970s when he first appeared in the Weather Report-informed progressive rock/fusion group Perigeo, skirting international fame with a series of recordings including Live at Montreux (RCA, 1976). In the years since the group's dissolution, Fasoli has continued to hone both his chops and his writing on albums like Infant Eyes (Philology, 2007), his collaboration with Lee Konitz, and a series of recordings with one of America's unsung guitar heroes, Mick Goodrick, including Cities (Ram Rec, 1993) and Ten (Ram Rec, 1995), which also featured Kenny Wheeler. The Claudio Fasoli Four is, however, all-Italian, and if guitarist Michele Calgaro and his brother, bassist Lorenzo Calgaro, are lesser- knowns along with drummer Gianni Bertoncini, then it's a situation that London Tube, if there's any justice, deserves to change.

Using the premise of traveling through London, England's subway system as a means of moving not just from one destination to the next but from one emotion to another, Fasoli's all-original compositions—all but the title track named after London Tube stops— cover a lot of musical territory, from the raucous, backbeat-driven opener, "Fulham Broadway," where Bertoncini's powerful kit work is matched by Lorenzo Calgoro's chugging arco, to the schizophrenic "Holborn" with Bertoncini's electronics introducing a dark-hued, ethereal ballad that, bolstered by Michele Calgaro's oblique harmonies, gradually turns more frenzied during Fasoli's searing soprano solo only to return, once again, to a more atmospheric conclusion, with some suitably Miles Davis-informed muted trumpet from guest Michael Gassmann, who augments the quartet on four of London Tube's eleven tracks.

The spirit of Wheeler looms large over the melancholic "Kew Gardens," which begins as a duet between Fasoli (on tenor) and guitarist Calgoro. if Fasoli's reach is wide, capable of intense lyricism and more expressionistic flights of freedom, then Michele Calgoro is truly the group's secret weapon: a guitarist as capable of warm, Goodrick-inspired support as he is lithe solos filled with implication of his own, ranging from earthy melodics to fuzz- toned explorations that integrate so seamlessly with his brother Lorenzo on the freewheeling "Covent Garden" as to suggest there really is such a thing as a sibling connection in music.

Fasoli's writing often covers vast territories with the same rapidity as the subway system that is the foundational premise for London Tube. A brief dalliance with swing on "Leytonstone" rapidly shifts, as Michele Calgaro's densely overdriven guitar chords create a choppy, metrically shifting foundation for Fasoli and Gassmann, only to open up quickly into a solo section, first for the trumpeter and then for Fasoli, as the rest of the group alternates between swing and chop like a train moving, perhaps, from an underground tunnel to an overground rail.

As much as London Tube can swing, can rock, can be free and can be built on fixed form, there's an overall atmosphere to the session that, hard to put a finger on, feels somehow feather light and elegantly gentile, even when things heat up, and even when both Michele Calgaro's effected electric and Bertoncini's electronics are in full flight. As fast as a subway train and just as grounded, Claudio Fasoli Four manages to tread a bevy of fine lines, doing so in a compelling and unified fashion that makes this London Tube a trip worth taking...again and again.