Heernt: Locked in a Basement 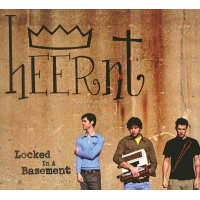 Mark Guiliana's work in Avishai Cohen's trio has more than demonstrated his rhythmic wit and precision in a consistently demanding musical setting. The drummer takes on the bandleader role with his new trio Heernt, whose debut, Locked in a Basement, reveals a sonic concept unlike Cohen's—and to Guiliana's credit, unlike anyone's.

This is groove-based, goofily virtuosic electric instrumental music that owes much more to electronica, synth-funk and indie rock than it does to traditional acoustic jazz. Let's simplify for the sake of space and say Guiliana plays drums, Neal Persiani plays electric bass and Zac Colwell plays saxophones and gloriously analog Juno-60 synth; but in truth, everyone—especially Colwell—plays a variety of other instruments.

Persiani and Guiliana are a dauntingly effective rhythmic duo, and these are essentially rhythm-driven pieces. Persiani's unerring, visceral bass lines partner perfectly with the leader's busier kit work on pieces that remain entertainingly fun no matter how trickily mined they may be with time changes and precision stop-starts. The title track starts with Guiliana's typewriter percussion (an electric one, natch) and morphs into a crisp, electronica-derived unison bass and synth over an airy drumkit groove—that description, by the way, does nothing to convey how unusually entertaining the song is.

On saxophone, Colwell has no trouble negotiating the demanding written sections of Guiliana's songs, and that's saying a great deal. He's less convincing as a soloist, however; there's a feeling of slightly anxious restraint in his alto solo on "Nice., and in his tenor break on Persiani's tune "Brown Bird, Olive Sloth, Green Dragon as well—it's as if he's uncomfortable improvising freely on reeds. The problems are more about fearlessness than chops, though, and he finds that lack of caution on "Pi ~ 3.1415 as his wriggling tenor lines use the composition, and Persiani's and Guiliana's twin-Godzilla accompaniment, as inspiration—as opposed to musical demands that must be met. It's nothing a few gigs won't fix.

Most of the pieces are marked by a cohesive, mature band sound. The floating, static flute/sax lines and wet cymbals of the sweetly somber "Aaaahh.. and the dubby bass and surreal, coffee-meets-marijuana momentum groove of "Quick Groove Rolling couldn't be less alike, but they both sound like Heernt. "Love Comma Mark is the only dud here. This guitar tune is so similar to the looming, volume-laden crescendo-rock of the alternative band Mogwai as to be virtually indistinguishable, and consequently pointless.

Overall, a great new band. Good though the record is, I imagine the group tops it in performance.