BY GLENN ASTARITA
December 1, 2000
Sign in to view read count 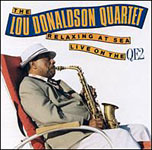 You can generally count on time-honored alto saxophonist Lou Donaldson for an effervescent brew consisting of peppery soul grooves and bop-ish swing, which is prominently evident on his latest release recorded for the folks aboard the Queen Elizabeth 2 cruise ship.

Live On The QE2 features the saxophonist along with jazz heavyweights such as Hammond B-3 master, Dr. Lonnie Smith, guitarist Randy Johnston and drummer Danny Burger as trumpeter Nicholas Payton joins the band on the Gershwin-Duke classic, “I Can’t Get Started With You.” A hearty mix of standards and originals, Donaldson exhibits a soft touch amid fleet-fingered lines on “Harlem Nocturne” while also jabbing and sparring with Johnston and Smith as the soloists effectively rework the primary theme via jarring solos, augmented by Burger’s straight-ahead swing pulse. Although the sonic characteristics tend to be a bit flat, the musicians compensate for less than optimum recording conditions with strong ensemble work and a seemingly carefree and altogether convivial demeanor. Hence, the festive surroundings of being on a luxury cruise ship are conveyed quite vividly throughout this charismatic affair.

Donaldson’s entertaining vocals on “Whiskey Drinkin’ Woman” and Bill Broonzy’s “It Was A Dream” pumps up the crowd while he displays his signature soul//bop style of attack on Charlie Parker’s “Now’s The Time.” All in all, the band’s breezy passages and–full steam ahead–approach sums it all up rather nicely.