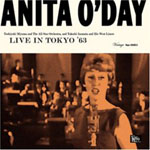 Inevitable with the upcoming screening of the documentary Anita O'Day The Life of a Jazz Singer at the 2007 Tribeca Film Festival is the release of Live in Tokyo '63. This is the soundtrack to a televised concert in Japan during O'Day's fruitful association with Verve records that was to last the decade. This inevitability is good fortune for O'Day enthusiasts as this concert presents O'Day at the top of her game, still basking in the incandescence of her filmed performance in Jazz on a Summer's Day.

O'Day is backed by a big band made up of the Japanese All-Star Orchestra, conducted by Toshiyuki Miyama coupled with Inomata and his West Liners. Buddy Bergman is in charge of the arrangements and O'Day stalwart Bob Corwin is at the piano. O'Day performs a basic standards set that includes one of her signature tunes, "Boogie Blues (but not "Leave Me Off Uptown ). O'Day reprises her Jazz on a Summer's Day pair of songs here, replete with mention of the movie. "Sweet Georgia Brown necessarily lacks the voltage of the 1958 Newport Jazz Festival performance, but O'Day positively sizzles on "Tea for Two.

O'Day proves her chops on "You'd Be So Nice to Come Home To, "Stella by Starlight, "Love for Sale, and "Night and Day. The real treat is the closing Jimmy Giuffre standard, "Four Brothers. O'Day demonstrates with scat, vocalese, and singing that she has only one real peer, the late Ella Fitzgerald. Live in Tokyo '63 only solidifies this deserved reputation.