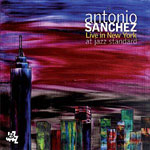 With a schedule as busy as Antonio Sanchez's, it's hard to image where the tremendously in-demand drummer finds the time to write, much less put together a group to record. Amidst a relentless touring schedule with artists including Pat Metheny, Gary Burton and Chick Corea, Sanchez released Migration (Cam Jazz, 2007), a heavyweight session featuring his twin-tenor/bass/drums quartet. An egalitarian leader, it also served notice of Sanchez's emergent writing skill, motivating a group whose primary purpose was to blow, and blow hard.

It's no surprise, then, that Live in New York at Jazz Standard is even more exhilarating, as Sanchez brings back the same quartet, with alto saxophonist Miguel Zenon replacing tenor saxophonist Chris Potter. A double-disc set with all but one of its eight tracks exceeding twelve minutes, it features the kind of profound empathy and improvisational élan to be expected from some of today's busiest modern mainstreamers. Metheny and Corea's guest appearances on Migration may have garnered additional attention, but Live in New York's set of Sanchez originals, with one track each from Zenón and returning tenorist David Sanchez, proves the drummer needs no ringers.

Tipping his hat to Metheny with an extended cover of the guitarist's "H and H," first heard on Question and Answer (Nonesuch, 1993), Sanchez's version swings even harder, with his two saxophonists delivering its memorable head with a blend of unison and divergent harmony. A series of solos then serve to define the multifaceted strengths of Live in New York's entire two hours.

Zenón—a fine leader in his own right and member of the SFJAZZ Collective—is the perfect combination of thoughtful intellect and visceral energy, building solos from a seemingly endless stream of motivic invention. David Sanchez is another fine leader who seems to shine particularly brightly in the company of others. Like Zenón and drummer Sanchez, the tenorist's Latin roots are unmistakable throughout, but they're an integral part of a larger whole, not an overbearing aspect of the saxophonist's freewheeling approach to long-form soloing,. Bassist Scott Colley—whose Empire is released by Cam Jazz the same day as Live in New York—may not have Latin music in his DNA, but it's clearly in his blood, as is a remarkable ability to anchor, whole soloing with profound simplicity when required, greater virtuosity when demanded.

This mix of gritty, post-Ornette Coleman free-bop ("Greedy Silence," reprised at double the length of Migration's take), gentle balladry (his aptly titled "Ballade"), unfettered funk ("It Will Be Better") and almost impossibly fast swing ("Did You Get It") all demonstrate Antonio Sanchez's skill at driving music with polyrhythmic intensity, delivering solo-after-solo of staggering multi-limbed dexterity and a melodic approach rarely heard in a drummer.

Nearly two years old, Live in New York at Jazz Standard may not represent where Sanchez is today, but if these performances are any indication, following the drummer beyond the his superb sideman work is a must, as his abilities as a composer/bandleader continue to grow in parallel with his rapid upward trajectory as a player.

CD1: Greedy Silence; H and H; Ballade; Revelation. CD2: It Will Be Better; Did You Get It; The Forgotten Ones; Challenge Within.