BY JOHN SHARPE
January 4, 2018
Sign in to view read count 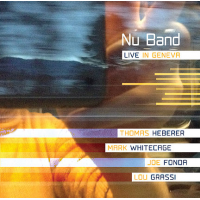 Everything must change as the Nina Simone song puts it. That's as true in music as anywhere else, and changing one of the parts inevitably affects the whole. When NYC-based German trumpeter Thomas Heberer replaced the late lamented Roy Campbell in The Nu Band, it must have been heart-in-mouth time for colleagues bassist Joe Fonda, reedman Mark Whitecage and drummer Lou Grassi. Two years down the road, everything has fallen into place on the second album from the new line-up. The original traits of craggy spontaneity and rambunctious swing remain in place, but are now informed by the trumpeter's improv-infused sensibility.

That manifests itself particularly during the staccato throb and interlocking flurries of Heberer's unpredictable "One For Roy," as well as in the conversational opening of "Lunch For The Pharaoh," where the trumpeter's growled counterpoint offers oblique commentary on Whitecage's alto saxophone digressions. Gradually, excitement builds and skewed rhythms cohere until the horns unite in a klezmer-tinged unison. The fluid interaction that follows confirms that another of the outfit's prime assets persists: the sure-footed dueling between reeds and brass. You get the sense that Whitecage especially will leap into the fray at the drop of the proverbial hat.

He certainly does on his own "5 O'Clock Follies," where the jumping free-bop suits him down to the ground. The track also provides Fonda's elastic pizzicato and Grassi's roiling drums with turns in the spotlight. And that's another pleasure the album provides: individual chops get a good airing alongside the group interplay, notably on "Little Piece" where everyone enjoys long unaccompanied sections shaped by the dirge-like ensemble passages which separate them. After a mournful interweaving at the start of Fonda's "Read This," Whitecage's alto lifts the spirits until joined by Heberer's perky repetitions and more freewheeling high jinks ensue.

By the close it's clear that the most effective response to change is a reframing of aspirations which makes the most of the what's to hand. If that can be accomplished with an inventive joie de vivre, then so much the better.

Lunch For The Pharaoh; One For Roy; Little Piece; 5 O'Clock Follies; Read This.