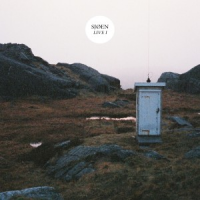 Sjøen (sea in Norwegian) is a new, Norwegian-Swedish quintet with a debut that was recorded during their first-ever concert, at the Energimølla club in Kongsberg, Norway, in April 2013. Obviously, it would not have been possible without the promising, young musicians that band leader and violinist Håkon Aase gathered. Each of them also play in other young bands that released debut albums within the last year. Saxophonist Harald Lassen plays in modern jazz bands Mopti and Pixel, pianist John Lindvall plays in the band Ronja, bassist Bjørnar Kaldefoss Tveite in the folk-jazz trio Hullyboo and drummer Axel Skalstad is in the improvising-power trio Krokofant.

This quintet draws inspiration from European contemporary music, Indian classical music and Nordic jazz but leaves enough room for personal, improvised contributions. The five pieces were composed by Aase and Lassen. The first and longest one, "3a—Earn and Burn," revolves around a driving, repetitive rhythmic theme that enables Aase and Lassen, then later Lindvall, to enrich it with a series of melodic, serpentine interplay, adding a folksy Far-Eastern lyrical touch to an infectious pulse. "Aases Reinkarnasjon" intensifies the atmosphere with a reserved, melancholic Scandinavian feel, articulated beautifully by Aase's singing violin and Lassen's saxophone contemplations.

This quintet is not tied to one specific aesthetic. The upbeat "Boulevard" employs the powerful rhythm section in a manner that challenges other players to answer with a rare, muscular series of improvisations until Tveite's double bass solo concludes the piece and introduces the closing, chaotic blues of "Baklengsland," featuring the quintet enjoying the playful, soulful improvisations on catchy scales.

Aase promises that Live I is the first chapter in a series of live quintet recordings. With these resourceful, inventive musicians there are many seas that Sjøen can explore.