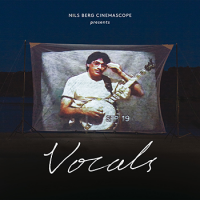 Swedish reed player Nils Berg scours the online world for unusual and unconventional musical performances to use as a backdrop to his music. He then edits the original down to capture the "essence" of the song and then writes new music on top.

Here's where it gets really interesting: the Nils Berg Cinemascope trio then performs the new music live with a YouTube video of the original artist projected as a living backdrop. In this sense, the "guest vocalist" is both seen and heard and a new quartet is created with each new song.

Vocals (Hoob, 2014) is the follow up to PopMotion (Hoob, 2013). Whereas the music on Popmotion was written and performed around video clips of instrumentalists from Ghana, Japan, Sweden and the US, among others, this time around the emphasis is on Middle Eastern and oriental vocalists. And, as with Popmotion before it, Vocals is as original as it is brilliant.

The melodic wailing of a young Afghan shepherd boy singing a song (presumably) of love is followed by a Swedish women's choir rehearsing for a big show, a Bhutanese girl and her crystal voice competing with the wind and even a Pakistani wedding singer in a private concert in a hotel room.

The seven tracks were recorded and filmed in late night sessions at various locations near the trio's Cinemascope studio in central Stockholm. Films hosted on a dedicated website show the vocalists projected on bed sheets, blank walls and even on the television at the local pizza restaurant. All the while the trio plays along, commenting and building musical "dialogues."

Don't just listen to the new record by Nils Berg Cinemascope. Open your mind and wandee through the streets of the Swedish capital with Nils Berg's dexterous, narrative flute work, Josef Kallerdahl's restrained, delicate bass playing and Christopher Cantillo's subtle percussion. All this and the unusual dialogue between musicians and vocalists that are either present or projected. Bravo!