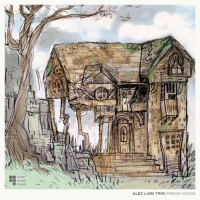 LoRe is a Floridian who traveled north to further his education at two venerable institutions—Boston's New England Conservatory, where he earned he earned his bachelor's degree, and New York's Manhattan School of Music, where he completed his graduate work. When all of that was said and done, he stayed in The Big Apple and started his musical journey in earnest. Now, several years into his stay, his debut album arrives.

The young saxophonist fronts a piano-less trio here, teaming up with two rising rhythm stars—bassist Desmond White and drummer Colin Stranahan. Together, they've been working as a trio, and as part of saxophonist Lucas Pino's No Net Nonet, for several years, so their musical language and communicative skills were in place long before this record came to be. LoRe's mentor—tenor saxophonist George Garzone—drops in on three of the eight tracks, but triangular chemistry remains the order of the day.

The album opens with LoRe and Garzone moving together through an alt-bop passage. Back-to-back saxophone solos prove instructive, with LoRe's balanced approach being countered by Garzone's more rhythmically aggressive and gruff demeanor. "Here Comes Tomorrow" begins with a simple three-note ascending saxophone motif, but it quickly becomes clear that the rhythm section wants and deserves the attention. White and Stranahan are in cahoots here, setting up some serious grooves that steal the show.

In this day and age, most musicians continue to recycle the same Ellington material ad infinitum, so it's nice to hear somebody work with a less-covered number like "Tonight I Shall Sleep." This piece begins in an unsettled space, but it quickly lands in a pretty place. The rhythm team catches fire partway into the title track, bringing some needed intensity into the picture, and the final pair of pieces—the slowly developing "Forward" and frisky "Buto"—bring Garzone back into play.

Dream House exists at a dividing line: it's tight enough to appeal to those centrists who are willing to go off the beaten path a bit, and it's loose enough to appeal to more adventurous listeners who still prefer music that's focused and friendly to the ear. Who knows what the future holds for LoRe. All that can be said, based on this album, is that he's off to a great start.