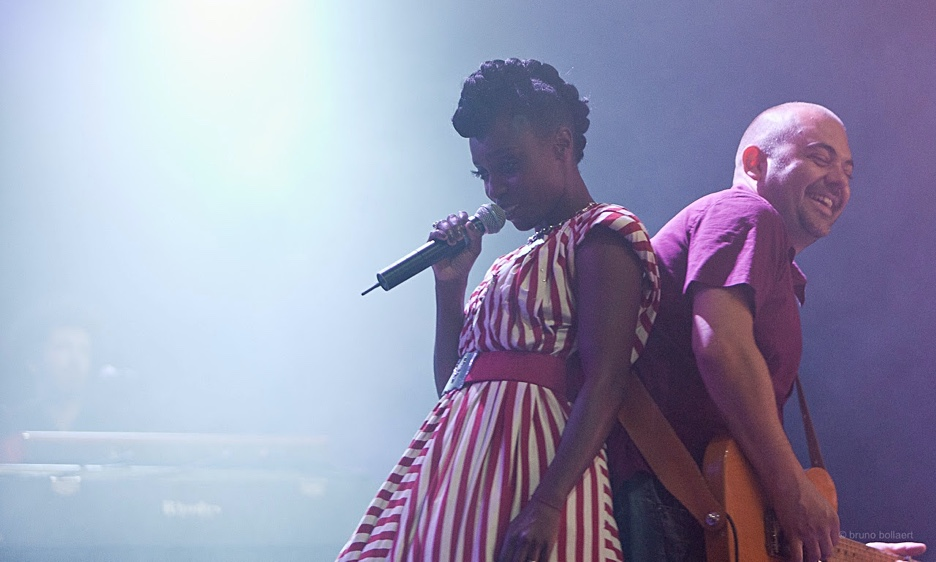 As part of Independent Venue Week, the Adelphi presented a few shows from higher profile acts, clustered into a week of condensed action. Morcheeba, the prime trip-hop band who have another period of increased (rescheduled) touring activity looming, easily sold out all the tickets for this intimate space. Crowded, but still blessed with good sightlines. Morcheeba were powerful in presence, but relaxed in delivery, particularly with singer Skye's mischievous asides.

Much of the set featured songs from their most recent album, Blaze Away, which are fine compositions, but not basking in the established resonance of their older 1990s chestnuts. It was released in 2018, and then again in 2019, as a collection of remixes. Skye Edwards already had a strong singalong going by their second number, with Ross Godfrey's lead guitar dominating the band surround of drums, bass, and keyboards. His deeply wah-wah-ed choppiness reared up repeatedly, as a heavy release for each song's climactic stretch.

Meanwhile, Skye stood on 'scraper shoes, her height increased further by a what was either a giant trilby or a smaller top hat. Her voice made a panther slink, Skye's trademark velvet fur tonalities being Morcheeba's most distinctive element. She had a sly slowness to her phrasing, as Godfrey untapped a flood of overloaded solos. Stylistically, the trip-hop enfolded reggae, dub, and Delta blues, as with "Part Of The Process," which is still one of the band's best songs. This was followed straight away by "The Sea," another peak composition, Skye inhabiting both numbers with a casual assurance, just like these were fresh works, rather than two-decades-old classics. Your scribe had to smile when she said "We'd just like to slow it down a bit." Even so, there was an eventual acceleration into the funk, when they played David Bowie's evergreen "Let's Dance," followed by their own "Blindfold," from 1998.

Rev Magnetic came down from Glasgow, their leader Luke Sutherland (voice, guitar, violin) being a regular touring member with that city's Mogwai for the last two decades. The Rev foursome revolves around his distinctive but somewhat overwrought vocals, with their most gripping sonic textures exploding out of the heavily pedal-clustered guitar of Gregor Emond. This meant that the wall of sculpted noise was preferable to the quieter parts that highlighted the vocal lines. An ambient folkscape introduced the set, with a repeating quiet-loud alternation, vocals matching this dynamic. Sutherland's style inhabited a fairly clichéd indie-angst range, as Emond's ultra-scabbed guitar rubbed rough shoulders with the sometimes saccharine vocals.

The opening local Hull band Bunkerpop were superior, if a punter was into Devo-esque, white boiler-suited disco-electro rock irony, residing under their yellow elasticated visor caps. Percussive thrust was provided by ruptured bass tones, matched with congas and atmospheric swathes, crawling initially, then with full drums and guitar weighing in, around a heavy and hard bleep-flatulent spine, a funk-lurch repetition. It was a heady locked groove, with fast-strum Velvet Underground guitar, cowbell always uppermost, and their last tune boasting subtle Congolese guitar inflections.

A few days later, coming as a complete contrast, the Stateside wedded duo of Amy LaVere and Will Sexton operated in a Memphis/Austin realm that was equal parts blues, country, rock'n'roll and singer-songwriter rootsiness. It was a songbook destined for the after-hours booze-slump. LaVere played electric bass rather than slogging her upright around on this tour, while Sexton provided an equal voice on guitar, slipping vivid licks in-between Amy's verse-lines. The contrast with the Adelphi's usual emphasis on loud rockin' made a captivating change, lending the club a very different character.

The pair crept in, turning tuning up into a song, as they gradually began their set. Sexton slung out a howlin' and pleadin' guitar solo for "Damn Love Song," the dialogue with LaVere's lines making for an empathic flow. The slinking, romantic numbers usually possessed a fair degree of spiked comment. She'd had a month without alcohol in January, so the swaying ballad of "Pointless Drinking" sounded like a release of pent-up pleasure. Sexton provided a few backing vocals, but it was about time he sang lead, sounding very Bob Dylan, the song turning out to be that very gentleman's "Just Like Tom Thumb's Blues." When LaVere was touring with Seasick Steve, she was introduced to John Martyn's work, and "Solid Air" has become a particular favourite. Sexton let its long notes linger, then spidered off into intricacy, leading into another of his lead vocals on "The Man Who Comes Around," originally performed by The Sweet Violet Boys in 1937. Now, Sexton was in the mood to play past the usual finishing line, fronting again with "Everybody's Movin,'" by rockabilly ace Glen Glenn, a gloriously twangsome thing from 1958.

Eugene Ripper started out on the Canadian punk scene, infusing his performances with surf-abilly, but now he co-opts country, blues and folk, with an amped-up acoustic guitar, viciously strummed. A solo Ripper gave the immediate impression of a Rick Rubin-era Johnny Cash, in his burred vocal styling. Early on, he drove through "The KKK Took My Baby Away," (The Ramones) then straight into Bo Diddley's lesser-played "Pills," as interpreted by the New York Dolls. The string-snapping Ripper upped the pace further with "Viva Las Vegas," a Doc Pomus ditty, but probably fondly recalled by Eugene as a Dead Kennedys single. He threw himself in deeply, strumming to burn leather, but eventually came to rest with "Sittin' On Top Of The World." We could see where Ripper was coming from, musically, closing out with the softest song of the set, his favourite Velvet Underground number, "Pale Blue Eyes." Rubble played forcefully, cracking jokes on the way, but his best insurance was a strong set of song choices, flung across the punk-country divide.