The legendary Doc Pomus found success as one of the finest white blues singers of the 1940s before becoming one of the greatest songwriters in the history of American popular music. The author of many of the most popular rock & roll songs of the 1960s, he composed “Save the Last Dance for Me,'' “This Magic Moment,” “Sweets for My Sweet” and dozens of others, including Elvis Presley's “Viva Las Vegas,” “Little Sister,” and “(Marie's the Name) His Latest Flame.”

Crippled by polio in his childhood, Pomus - born Jerome Solon Felder on June 27, 1925 in Brooklyn, New York - became interested in singing blues and writing songs after hearing a Big Joe Turner record as a kid. He played saxophone at the time, and after hearing Turner, blues music became his obsession. By the mid-'50s, after singing in a thousand blues clubs, Pomus came to a crossroads in his career: he was in his early 30s and if he wanted to get married and support a family, it was not going to be by singing the Blues - he decided to concentrate on songwriting. He took a young piano player, Mort Shuman, and molded him into his writing partner - a partnership that lasted many years and even more hit songs.

Together, Pomus and Shuman wrote the words and music to such hits as “Save The Last Dance For Me,” (one of the 25 most popular songs ever recorded) “Little Sister,” “Suspicion,” “Can't Get Used to Losing You,” “Surrender,” “Viva Las Vegas” and hundreds more. After securing their office in the Brill Building, the team continued to crank out hit after hit. Presley alone ended up recording more than 20 of their songs throughout his career, including items like “Mess of Blues.”

After the Pomus-Shuman partnership broke up, Pomus took a ten year hiatus from writing. Afterwards, collaborating mostly with Dr. John, Pomus penned another string of gems for B.B. King, Mink DeVille and a host of others. In 1991 Pomus became the first white person to be awarded the Rhythm and Blues Foundation's (an organization he co- founded) Pioneer Award. Later that year, on March 14, he died of lung cancer at the age of sixty-four in New York. In 1995 Forward Records (a division of Rhino Records) released “Till the Night Is Gone,” which featured recordings of fourteen of his songs, many written with Mort Shuman, by artists such as Bob Dylan, Lou Reed, John Hiatt, and Roseanne Cash.

Since his death, Pomus has been elected into the Rock & Roll, Songwriting, Blues and New York Music Halls of Fame. Featured in hundreds of films, TV shows and commercials, his songs have sold over 250,000,000 recordings and achieved more than 50,000,000 broadcast performances. His songs have reached number one on every type of Billboard domestic and foreign charts and have reached the top forty in every decade since the 1950's. Show less

Who Was Doc Pomus? 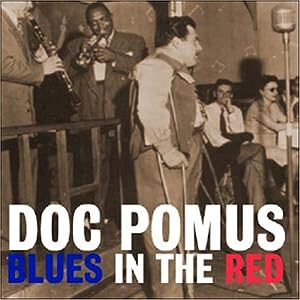 Blues in the Red

All About Jazz musician pages are maintained by musicians, publicists and trusted members like you. Interested? Tell us why you would like to improve the Doc Pomus musician page.