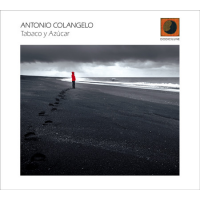 Explorers of all kinds—but especially those musical—have a common thread in their DNA to expand our universes and provide a vision to the collective consciousness. For them, it is a relentless but never-ending journey.

With Tabaco y Azúcar, Italian-born guitarist Antonio Colangelo and his superior crew present nine tracks of deep textural insights delivered via stellar musicianship. Colangelo, who since 2007 has resided in Brazil, demonstrates here that he is a performer, composer, and leader certainly worthy of wider world-class recognition.

Colangelo's music on this effort is highly stylized, textural, and varied with a lion's share of Brazilian rhythmic and melodic platforms. The title track—indeed a highlight—drifts from Latinesque to rock and sets the stage brilliantly for what is to follow. Flutist Cristian Faig takes charge and flies solo on the joyful samba "Crocco & Lampãio." "Napulengre" vamps dark as Colangelo explores creative depths in a triple-metered stalker before breaking out. "Let Me Break Your Funky" does just that and explodes furiously, driven by drummer Pierluigi Villani and bassist Vincenzo Maurogiovanni. "Molejo de um Amor Ferido" is a lush bossa nova, with tenor saxophonist Fabio Mello blowing silky and Stan Getz-smooth, on a tune that includes a superb Calegari bass solo.

A gifted technician who never wastes it, Colangelo moves across his instrument like a sorcerer with intriguing ideas and awesome improv chops. His playing and ideas draw the listener seductively into his multi-stringed web. His sound is classically robust, darkly shaded and never harsh. One can discern that he is a Pat Martino acolyte and keen observer of guitarists new and old. Colangelo's comp pen draws broad stokes as is done on "Canto de Partenope," a soundscape of hauntingly deep introspection. "Cairo Metropolitano" plays out as an exotic dance where Colangelo and synth do a harem dance as bassist Maurogiovanni sends up a daring solo. "Tequila for $5" is a 5/4 groover with Colangelo stretching out and Pierluigi Villani delivering a killer solo.

Tobacco and sugar may be items to avoid, but, Tabaco y Azúcar is a lovely experience in which to indulge.