The Andrew Allen Trio: Live! from the Cantina: A Star Wars Jazz Tribute 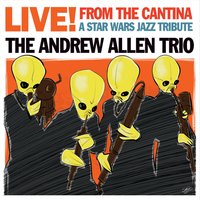 The universal appeal of the Star Wars soundtrack cannot be denied. It has become so iconic that any reimagining of its music is sure to be highly scrutinized. The Andrew Allen Trio took a big risk in putting a jazz spin to the Star Wars soundtrack but it has paid off significantly. Their new album Live! from the Cantina: A Star Wars Jazz Tribute is a testament to Allen's quirky creativity.

The first track in the album is "The Main Theme," which is the trademark Star Wars music. It starts off with drum beats, followed by bass and electric organ, before it builds up to the sax version of the epic verse. Star Wars never sounded so light and relaxing with the band's reimagining of the song. It's fresh, fun, and funky.

"Luke's Theme" is fueled by saxophone, electro pop, and jazz elements. What begins as a slow, stripped-down version of this signature track becomes upbeat and electric as the song progresses toward the end. The bass undertones and almost feathery drum beats make the cover more unique, and yes, addicting. Many twists and turns with pockets of surprises all throughout—may it be a sax solo, a funky play with synthesizers, or a groovy shift. This track is a like a hybrid lightsaber that cuts through all genres. The playful "Yoda's Theme" is like a happy pill that can brighten any gloomy day, an invigorating mix of blues, funk, and jazz. The bass solo is subtle but magnetic.

How Allen and his band fuses the music of the Star Wars cinematic universe with various musical styles inject it with new life; better yet, they do it without losing the original and distinct attributes of the indelible songs. While Allen is probably known for doing covers of movie, television, video game, and pop-culture hits, Star Wars is probably the biggest franchise he's taken on, but the Force is indeed strong with this young talent.

About The Andrew Allen Trio