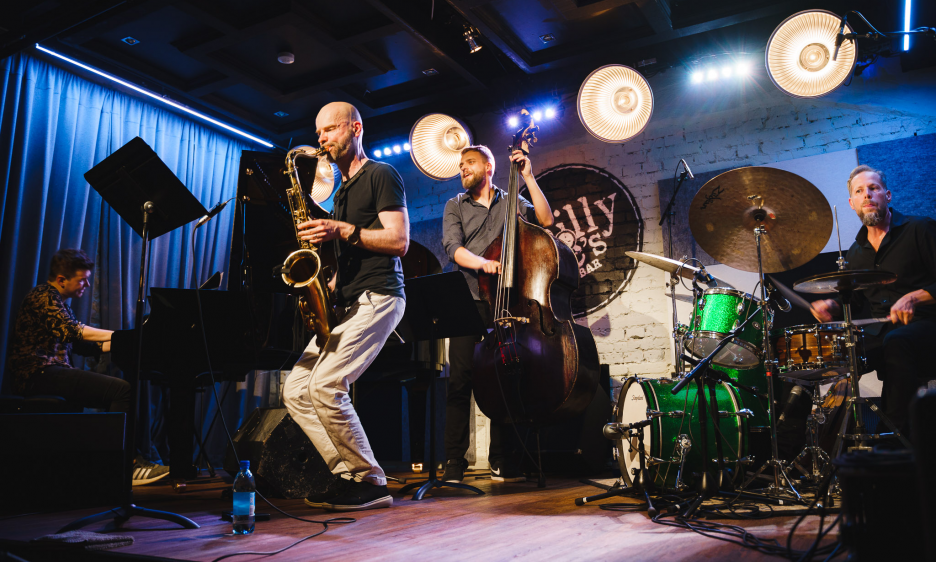 Philly Joe's Jazz Bar is, somewhat appropriately, situated right on Freedom Square, a key central location in the Estonian capital city of Tallinn. There aren't so many global instances of similarly prominent placements for such basement dens of groove. Philly Joe's made the short skip from a more obscure back-street premises a few years back, although its new incarnation still preserves the old vibrations, spread throughout a bigger room, and with a slicker interior.

Lately, the focus has been on native Estonian performers, but this gig marked the beginnings of international bookings returning, even if only from nearby Finland. The Helsinki drummer Jussi Lehtonen's quartet is otherwise composed of Estonian players, together now for three years: Joonatan Rautio (tenor saxophone), Holger Marjamaa (piano) and Heikko Remmel (bass). This last player is a member of an Estonian jazz dynasty, and is a prominent sideman himself, here driving the combo hard, with his head constantly nodding and bobbing at speed, his upright bass a conduit for any surplus energies.

Right from the get-go, Rautio let off a tough barrage of tenor phrases, winding through all available possibilities, whilst the leader slammed out skin-bombs, cymbal splashes, and a riding hiss on his hi-hat. Right from the outset, it was clear that this foursome favours ricochet hard bop. This was their first Philly Joe's gig as a quartet, opening with "Moonshine," chased by "First Born," letting up the pressure for "Chillin,'" a breezy, softer number, with some melodic bass sweetness. It provided a chance for them to stretch out, even if the pace eventually quickened before the conclusion, with a soulful, bluesy lilt to Rautio's solo. This band can't resist acceleration!

Side-stepping their original tunes, George Shearing's "Conception" reared up, with some angular tenor progressions, striding along an imaginary avenue, with emphatic slow-time drum punctuations, Lehtonen eventually delivering his own solo, as is often traditional at the climax of a first set. He brawled, outgoing in his thunderous eruptions.

Before the band played, during the interval, and continuing to the night's end, vinyl revolved on the club's decks, as is the way at Philly Joe's, entire LPs getting aired. It was a Lee Morgan platter, between sets, and Cannonball Adderley to close out the night.

The second set stormed even harder, this quartet loving to play, opening with a tenor-and-drums conversation, a rat-a-tat prior to the full four engaging in their collective swagger for "Aphrodite." They remained at peak level throughout both sets, Lehtonen mentioning that some of his tunes stretch back almost two decades. Rautio bent his knees for maximum wailing on "Day 10," continually escalating towards a howl, just when we might have surmised that the number might be concluding. But no, a vamping piano figure descended during another drum solo, with the tenor issuing long notes, and Remmel's bass marking time's inevitable progress.

There was a lounge-like respite, governed by the piano, Marjaama savouring each embellishment for this easy swinger. There was a light funk slowness to "Time Out," which called up the visage of Michael Brecker, moving into "Bouncing With Julius," which sounded like it could have been dedicated to Mister Hemphill. Originally penned for an organ trio, Lehtonen niftily re-worked the piece for a 'standard' jazz quartet line-up. Swift, and getting swifter, this was the heads-down final run, Remmel's tongue sticking out as "Tingle Tango" swept across the mind's dancefloor.

Across town in the Telliskivi Creative City, Tallinn's ultra-arty quarter, the Sveta Baar hosted a triple bill of alternative rock bands, playing late and loud, into the night. Two of these, Akli (from Lithuania) and Dreamkrusher! (not to be confused with Dreamcrusher, the NYC industrial electronicist), are set to appear at Tallinn Music Week, in this very bar on 30th September, 2021, as part of its Void Valley showcase. The guitar-o-centric Dreamkrusher! were partly the lords of the skewed and potent cover song, playing an extremely funksome and tight rendition of "Psycho Killer," by Talking Heads, then a similarly fine-taste transformation of Massive Attack's "Teardrop." They were psychedelically hard, but also fond of sinuous syncopations, with Australian singer Corey Tomlins a nimble, bearded-croucher frontman, impressive on both the pedal and vocal mobility fronts.

Well, this entire evening was pretty much guitar-o-centric, really, Particularly when the two factions of Zahir and Shelton San combined their axes in a formidable row (or row) of sound. This was heavy rotation headbanging, as the night became more focused, and increasingly crazed. A solid rock density pervaded. The actual guests from Lithuania were the least remarkable band, as the trio of Akli were a smaller force when following that preceding five-guitar frenzy. Their songs were also more conventional, at least when compared to the doubled Zahir/Shelton San output. Perhaps Akli should have played first.

Tallinn Music Week will also feature a showcase from the Jazzkaar festival, on October 1st, 2021, at the Fotografiska gallery...