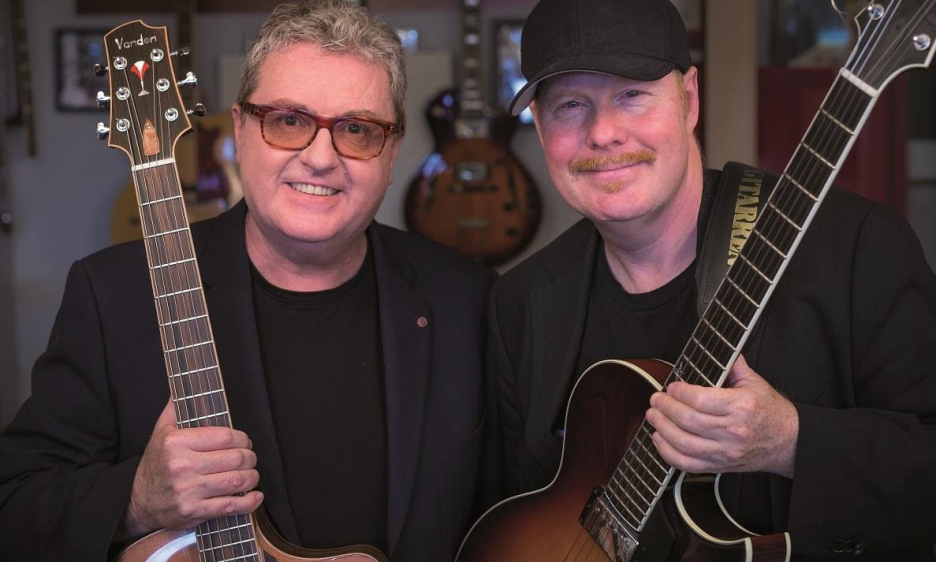 Martin Taylor and Ulf Wakenius are a prime pair of guitarists from their respective countries, England and Sweden. They've worked together regularly, but presumably touring mostly outside of the UK. This duo set, electric but toned down in volume, had a friendly vibe of playful competition, unavoidable when two artists are exchanging solos, besides delivering the main melody of a composition.

Both players are around 60 years old, and both favour a style that's rooted in the mellow tonality of Wes Montgomery, when jazz guitar mostly possessed a dappled, warming fluidity, debonair and tasteful. The duo's guitaring kept its volume low, harking back to the years prior to amplifier cranking and toppling speaker stacks. Well, Wakenius is completely capable on the frazzling front, under other circumstances, but here the duo were without amplifiers, plugged directly into the NCEM's new p.a. system. There's an almost invisible placing of slimline speakers around the church arches, these still holding adequate power in the increasingly compact audio technology fashion of today.

Despite our ears thinking of Wes, the pair's stated intention was to pay homage to the jazz stars with whom they made their early reputations. For Taylor, this was Stephane Grappelli, whilst Wakenius was casting back to his time with Oscar Peterson. Both Taylor and Wakenius spent around a decade apiece with their mentors. Curiously, if we hadn't been informed of this concept, the evening's music wouldn't particularly have suggested Grappelli or Peterson's towering presences.

In this setting, there wasn't a massive contrast between Wakenius and Taylor's approach or tonalities, unlike other duos who might make more of their differing natures. This pair's seamless rapport assisted the easy streaming of "Blues For A Playboy" and "I'm On My Way," a Barney Kessel double bill. Thirdly, they chose Henry Mancini's "Two For The Road," so at this early stage of the show, they were hardly picking through predictable selections.

Taylor and Wakenius each presented solo numbers, with Ulf displaying a few country licks, something that's not unusual for Martin either, with his old work alongside Chet Atkins. Wakenius, when alone, operated with an increased aggression, flighty and percussive in his speedy digit contortions, detailed with a greater dynamism. He also had an unhealthy predilection for saccharine Stevie Wonder numbers. Wakenius soon redeemed himself with some exceptional solos during "Jersey Bounce," and with the inclusion of Luiz Bonfa and Egberto Gismonti tunes in his Brazilian medley.

The Rheingans Sisters
The National Centre For Early Music
March 11, 2018

There are many fresh young artists entering the folk scene, with new tactics for dealing with traditional music, yet still inexplicably attracting an audience that's, on average, considerably older. This is often a similar situation on the jazz scene, although there has been massive recent change in those quarters, of course. The Rheingans Sisters number amongst the new-ish wave, and have a striking approach to justify current media attention, even if, here in York, the gig didn't sell out, as do most of the venue's old-guard folk shows. Still, the NCEM was reasonably well-filled for a Monday night.

Rowan and Anna principally play fiddles, and sing, but there are also excursions into extra instrumentation. They grew up in the Peak District, and their father is a violin maker. Both sisters have studied folk traditions extensively in Norway and Sweden. It soon became apparent that this gig was going to be no celebration of the local English, Scottish and Irish traditions, but rather a pan-European journey, influenced by the folk tunes of places where these sisters have studied.

Anna has been living in Toulouse, and is heavily immersed in the French folk tradition, particularly from the Occitan-speaking southern region. It was with a run of this repertoire that the first set opened, Anna tapping her amplified clogfoot, the fiddles swooning and swaying their phrases, as if on a heaving ship-deck. Rowan sung "This Forest," with Anna playing a fiddle solo, keeping that swinging motion, with the tipping of linear lines. It was an absolute masterstroke when Anna whipped out her small, thin, wooden flute for a climactic solo. They went French dance tune crazy during this opening rush, trotting out incessant rondos. Rowan picked up her banjo, percussive emphasis rife, as Anna hit the strings of her psalterium (a kind of drone percussion zither) with one hand, whilst trilling flute with the other.

The second half began with a pair of Olde Englishe numbers from the 1600s, just to briefly settle back home: "Blenheim House" and "Grimstock." Next came an Occitan set, plumbed from the archives down there in southern France. Then, a couple of Swedish tunes, harmonious and gliding, into some Norwegian selections. Anna revealed that her fiddle's name is Brian. Rowan introduced her own tune, "Mackerel," inspired by her two week residency in Senja, up in the far north of Norway. None of these sounded like hoary history, as the Rheingans always impart an individualist air of experimentation, completely inhabiting the core musical material, and realising it as they see fit, right in the moment of combustion.