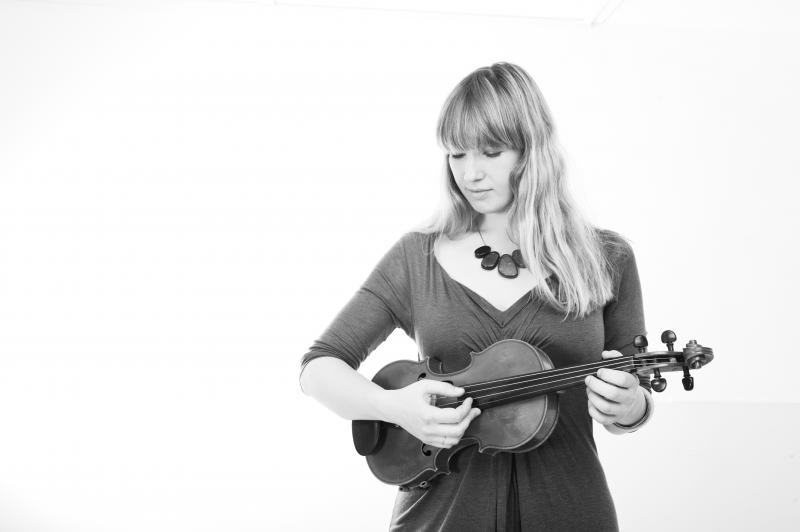 Scottish fiddler Patsy Reid forged her reputation as a co-founder of Breabach, but took her leave from this thriving folk combo in 2011. Now, she's leading her own new-ish small outfit, deliberately treading the familiar furrow of the traditional folk circuit, keeping it intimate for this well-filled upstairs gig at The Black Swan. Even though this weekly club will regularly play host to some of the music's outlaw types, it's still notable when a band appears that features a drumkit and an electric keyboard, even if the former is minimalist in nature and the latter spends its time impersonating an upright piano. This gig was part of a brief UK spurt, before Reid went off on tour with tablaman Zakir Hussain. She began her southward journey that morning in Perth, picking up the other players in Glasgow, on the way. The four-piece set-up was completed by Ewan MacPherson, who switches between mandolin and acoustic guitar.

The night began with a few songs from emceee Eddie Affleck, providing suitably Scottish support, and solo singer John Cherry, recounting tales of the ocean wave, and selecting "My Darling Clementine" as his slightly dark delivery, pre-Valentine's Day. The Patsy Reid portion of the evening was dominated by tunes lifted from The Brightest Path (2014), her acclaimed solo album. The material was very varied in mood, ranging from introverted soundscapes, spread with Signy Jakobsdóttir's delicate mbira (thumb piano) frissons, edged with electronic effects, or her hissing cymbal-strokes and xylophone chimes, but often rising up into a following number that fully obeyed the road rules of a racing reel. Keyboardist Alistair Iain Paterson was equally at home with either dappling or dancing. Though Reid's core fiddle sound is simultaneously buried in folk earth and soaring high above it, her bandmates help to create a soundscape that's not usually found in the music, having more in common with a jazz texture, or even, at times, possessing a rock band dynamic, albeit reined in on the volume level front. A hushed outcrop of potentially rollin' boulders.

Paterson's sole use of harmonium was made early on, during "A Precious Place," so he then made the wise move of shifting it to the back of the room, giving the quartet more room to manoeuvre. Mournful suspension was bedrocked by light cajón thrums, Jakobsdóttir revealing yet another element of her varied percussion spread. MacPherson skittered with lightning precision at the high range of his mandolin strings, as Reid reeled flightily through another set of dusty old tunes that she's revived and revivified. Centuries-old melodies reincarnated with a modern band sound. Returning for the second set, she opened completely solo, gently joined by piano, then burnished cymbal spits, with a rare instance of slide mandolin entering later. Such a swing between forward romping and soft introspection served this crew very well, even if the odd vocal number revealed a more fusty, plummier aspect of the repertoire.

This solo piano recital in the Rymer Auditorium gave good space to recent compositions, but also featured a pair of Russian three-part étude-clusters from older periods. The room's acoustic space is alarmingly dead, for those used to amplified pianos, or to concert halls, or even churches, with copious reverberation capacities. It boasts the closeness of a studio, which was quite refreshing, once the ears had adapted. This quality automatically gave an immediate clipped resonance to the notes, as Clare Hammond proceeded with a virtuoso set of pieces that mostly had an affection for the fast, hard, complex and careening, factors which their interpreter was well-equipped to render. It was useful to have her eloquent introductions placed between each composition, even if they combined the qualities of an overly formal schoolteacher, but with a faintly winking playfulness. A fixed, formal poise ended up being a fitting start-point for these sometimes explosive runs, clusters and pointillist stamina-fests.

Impressively cathartic though the recent pieces were, the études held more romantic resonance, in their grandiloquent old school fashion. Sergei Lyapunov's tunes were penned at the turn of the century-before-last, while the Nikolai Kapustin threesome hailed from a mere 1992, and both of these were performed, tellingly, without the aid of sheet music. This is not to say that the younger works should be negatively coloured, it's just that their concepts seemed to distract from their flow. Perhaps Hammond shouldn't have revealed so much background verbally, but conversely, it's always edifying to have a good yarn spun beforehand. Particularly with Adam Gorb's "Velocity," prompted by a viewing of Speed (1994), surely an unlikely choice of movie to provide deep inspiration. The entire single set swooped by in not much over an hour, this being a concise performance, requiring immensely compacted negotiations.

This appearance by singer Ruth Keggin was presented as part of the Jorvik Viking Festival, and only 45 ticket sales were needed to sell out the cosy Barley Hall. Hidden in an alleyway, just off historic Stonegate, it's a rickety old joint , built by monks around 1360, but heavily reconstructed in the 1980s. Keggin arrived from her abode on the Isle Of Man, armed with a songbook penned mostly in her native Manxian tongue. So near, and yet so exotic! Joined by acoustic guitarist David Pearce (who's also a movie soundtracker) and upright bassist Vanessa Hutchinson, Keggin also played occasional flute and piano. Apart from the exceedingly quiet latter instrument (electrified model), all was absolutely acoustic in this big-beamed, high-ceilinged chamber. It's a rare treat to hear songs projected in such a naked fashion, an act that immediately sets up an inclusive intimacy. Most of the works dated back hundreds of years, but were notably relevant in their mostly miserable concerns. Keggin laughingly apologised for this happenstance emphasis on lost love, betrayal, falsehood and natural disasters. Only one, or perhaps two, of the night's ditties were remotely upbeat. In the world of dark folksong, the audience is able to forage for the warm glow provided by a writer's melancholy, so all was well in the end.

Keggin doesn't possess a particularly resounding set of pipes, but her voice rang out clear and straight, up to the rafters, set amidst the attentive silence of the small gathering. A lack of proficiency in the Manx tongue could be seen as an advantage, imparting an aura of mystery to the lines, even though they'd been sketched out beforehand, with an introductory word from Keggin. The bass and guitar parts were balanced between modern folkiness and smooth jazz colourations, the songs combining their ancient feel with a modernised setting. The gig actually began 15 minutes early, as all of the punters were already seated, and the first half wasn't much more than half an hour in length. Another 30 minutes for a break, and the slightly longer second part led to a very early finish. Given that the material was so delicately disposed, this was probably around the right duration, as in this setting, the audience's concentration might have started to waver if another 30 minutes had been added. The most startling sequence was the tale of fisherman's doom, as bowed bass and guitar helped paint images of accumulating tidal mass and dark hopelessness.