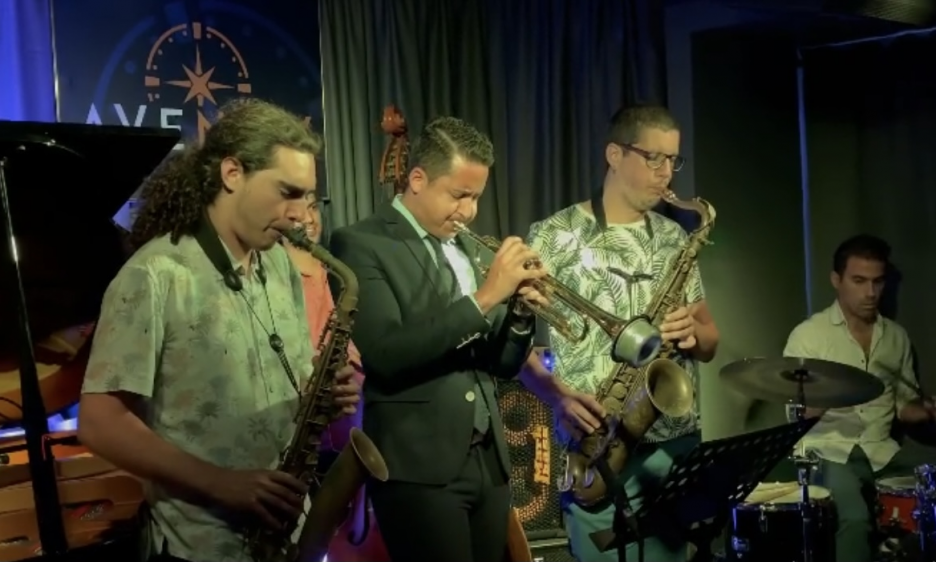 Cosmos Campolide is a new venture housed in an aging building, which used to be an 'old gentlemen's club,' going back around a century. From the street outside, its existence as a moderne venue for electronic adventure isn't evident, it just looks like a scuffed, crumbling, wise old edifice. Venturing up the stairway, it still retains an authentically sepia visage, with original framed photographs of old sports teams and specialist societies, billiard tables, and to a side room, a boxing ring zone. A curious haunt, indeed...

On this night, the Cosmos beings presented Music For Space Tourism #4, with dj sets and live musical performance. Patrícia Brito came down from Porto to spin a darkened-twinkle set of what might be termed rumbling industrial ambient space opera. Banha Da Cobra arranged their objects across the above mentioned pair of billiard tables, the audience sitting around to observe this duo's electroacoustic manipulations of the physical realm. Mestre André and Carlos Godinho worked together, close-microphoning small plastic, wooden, bone and metal bricolage, mostly small percussion instruments, skins, bows, a shofar horn, feeding towards laptop innards, for ritual transmogrification, layered up as shaped spatial music rather than mere documented fiddling.

An 11am concert on a Saturday morning might well be a tad early for many jazz aficionados, and certainly for nearly all jazz musicians, but this outdoor gig was intended as a family get-together opportunity. In reality, there wasn't much of a kiddie infestation, and most of the audience were attentive older folks.

Mário Laginha is one of Portugal's best-known players, at home and internationally, so it was good to find him in this relatively informal setting. His trio was completed by bassist Bernardo Moreira and drummer Alexandre Frazão. A significant portion of the set was consumed by lengthy interview exchanges, which led the few non-Portuguese speakers impatiently awaiting further actual music. Mostly, though, the audience comprised native locals, as this performance was in a relatively obscure location, away from the touristic tracks.

The tunes were largely lyrical, with a bright-sounding pencil-thin speaker system projecting well in this garden setting. Frazão lent a light funk, linear beat rather than being conventionally jazzed, as the leader rippled lightly. The elevated highway above provided some quite extreme lorry-load rumbles, besides the sounds of landing jets and general wind-whipping. Out of a subtle beginning, Laginha developed a forceful piano figure, latching on and repeating with increasing emphasis. Frazão overlaid a vigorous drum solo, and this tumultuous section should have lasted even longer. As the trio continued, a couple of numbers benefited from a briskly buoyant Latin pulse.

It seems that the Brazilian drummer Frazão might be a ubiquitous figure on the Lisbon scene, as he turned up three days later for the Avenew Jazz Sessions. This slick club presents gigs on a very regular basis, with an emphasis on mainline styles. The music happens in a smallish room to the rear, up a small set of steps, red drapes swirling. It also boasts a fine, enveloping acoustic quality. Available beers included dunkel and IPA, in specialist guises.

This mid-week trio show seemed to be designed as a jam session, but no guest players were in evidence. The cutting flash of a tight alto saxophone-led threesome was certainly sufficient, though, as hornman Ricardo Toscano spouted bittersweet runs, hanging around his alto's mid-range. He evolved towards a sudden a capella coaxing, until bowed bass and tumbling drums returned to action. Toscano's shivery-overblow solos were frequently wiry and winding, as Nelson Cascais pulsed his bass and Frazão took a bombing route, then soloing very subtly with flicked brushes around his cymbals. Toscano would lunge down to a lower phrase, chase up high again, emitting a citrus shower into the bass expanse, as a faint drum-snick made its understated comment. A clipped cymbal shish cut through another wild drum solo, tumble, boom, then splash. This trio possessed a real equality of soloing space.

Penha Sco is an art gallery and basement music venue, angling towards freely improvised jazz, or generally out-there composition. This early evening gig had the simply-named Huh! play to a small, spaced-out audience, maintaining a committed concentration throughout. This was evident with both the band and the attendees. The roster featured alto and tenor saxophone, electric guitar and drums. Awash with environmental details, the foursome worked equally, as a repeated Bruno Ramos guitar structure appeared, prompting a guttural tenor solo, the energy levels making a quick hike towards maximum power. Both reedsmen honked and squalled with an overlapping complexity, as effects loaded up the guitar texture, facilitating a glassy, hovering presence, Miguel Fernandez's drums intermittently tattooing. The saxophones could be alone, together or exhibiting simultaneous thought patterns, probing lower tones as they popped and gobbled, occasionally intersecting like flashed blades. Huh!'s ultimate peak involved a hurtling racket, even as melodies formed out of the morass, guitar and drums rearing up for argumentative exchanges, with an emphatic grudging that turned into an elaborately organised conclusion. Then they all resumed painting images, quietly.

Trumpeter Gileno Santana was unavoidably central to the next Avenew evening's Miles Davis Legacy presentation, concentrating on the complete Kind Of Blue. That might sound like an unimaginative concept-choice, so overdone and so predictable, but the assembled crew approached the material with a sensitive open-ness, as if they were examining the melodies as fresh works. This was quite a feat to pull off, and a massive burden on Santana's shoulders, well-supported in the end. There were two full-capacity sets, and by the second time around there was an almost meditational atmosphere surrounding the players and audience. "All Blues" took on a warmly swinging shape, the three horns gleaming equally in their highly sensitive, careful restraint. "Flamenco Sketches" featured fine solos all around, with Santana completely immersed, dedicated to his heavy role. The set became an almost spiritual experience, the group worshipful, but not blindly in thrall to this LP's classic status.