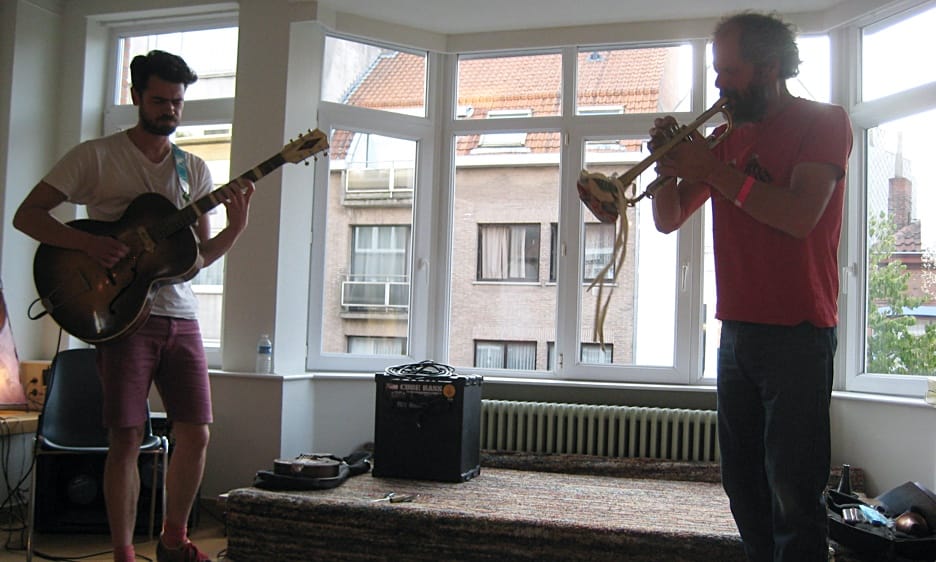 The Dutch-speaking Flemish north of Belgium has its own scene, even though crossing over to a great degree with the central Brussels hub. In quaintly historic Bruges, the Parazzar bar/restaurant is a well-established joint with a pronounced devotion to jazz and freely improvised sounds. This summer, its governing force of Joeri Hostens and Peter Jonckheere have opened a pop-up art gallery just across the un-busy street, where the latter is exhibiting a prolific and impressive spread of nude drawings, reminiscent of the wiry works of Egon Schiele. Parazzar are presenting a series of gigs in this upstairs space, during July and August, with different musical styles highlighted each weekend, including flamenco, global folk and moderne classical

Trumpeter Bart Maris invited several players over the free improvisation days, and the first evening involved a duo with guitarist Jasper Stadhouders, from Amsterdam. The pair are both members of the mostly-Dutch band Spinifex , who were a mega-highlight at the Moers Festival, in Germany, 2018. Maris began with a mask as mute, draped over his bell, whilst Stadhouders played an acoustic guitar through an amplifier, allowing the effected potential of an electric, even if toned down volume-wise. He scratched his strings, making intuitive pauses, as the duo made intersections of momentary silence, often stopping and re-starting at exactly the same instant. There was the implication of a larger band dynamic, issuing from a mere two bodies. Stadhouders made lightning strums, alternating with lightning plucks, whilst Maris blurred pepper-spurts through another, more-expected metal trad-mute. Stadhouders suddenly cut his amp-output totally, making muted strikes himself. Nothing like cutting the current to formulate the ultimate muted sound!

Maris produced high-spit buckshot, but fortunately the audience were sitting in spaced-out chairs, with a gallery capacity of around 20 places. Stadhouders unveiled a surprise mandolin, and another softer sequence developed. In response, Maris whipped out a flugelhorn, prompting Stadhouders to produce a drone with bottleneck, back on guitar, ringing out knuckle feedback, as its body became a percussion instrument, a metal spoon also employed. This pair are steeped in the techniques of a stark-exposure attack, but they also savoured some softer moments together, concluding with peppercorn horn and light mandolin flays.

A vaulting Romanesque/Gothic church is an ideal location for spaced-out audience seating, establishing an imposing acoustic environment, plus being generally ornate. Gent's long-established folk bar Trefpunt had assembled a Sunday lunchtime series of gigs during July, in the church that looms over its premises. This was during the same period as the massive, street-overflowing Gentse Feesten which would, under usual circumstances, be happening right at this time. That whole sprawling mass of its modern revival grew out of the Trefpunt folk scene, back in 1969, although the festival's ancient roots lie in time-misted 1843.

What was hopefully going to be a highly unusual meeting between reeds and harpsichord turned out to be a pair of separate solo sets, operating in very different musical quarters. Jan Devlieger delivered a very traditional old school repertoire for harpsichord, grouping two or three pieces in individual sequences. The harpsichord was a touch too highly amplified, even in this voluminous space, but it was wonderful to hear it in such focused fashion inside Jacobskerk.

Contrastingly, reedsman Joachim Badenhorst elected to float organically into the walls and rafters, moving through his three horns, as if engaged in a sonic science experiment, mapping out the innate character of this ancient edifice. Badenhorst let it cast back his own issuances, which he responded to immediately, sustaining the reverberations, surfing across his own lingering tones, made 20 seconds ago. Badenhorst was equally devoted to clarinet, tenor saxophone and bass clarinet, beginning on the latter with a soft, circular-breathed drone, reminding the listener of fellow reedsman John Surman's own adventures in spiritual and natural evocations, steadily increasing the pace of phrasing. Badenhorst sat on a wooden chair, with his smallfry clarinet, making percussive edges via clipped air-pellets, constructing a cascading, rippling flow, towering up the spire. As the third exploration featured tenor saxophone, Badenhorst was keen on giving each horn some action, brushing off that ingrained lockdown dust. These two players each delivered majestic solo performances, now seemingly unable to socialise after four months of enforced isolation!