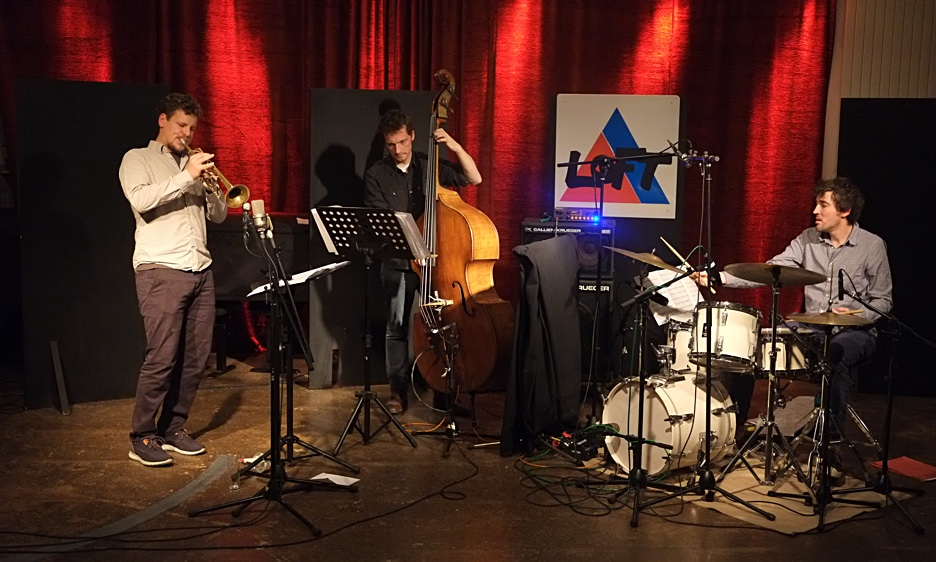 The Loft is indeed right at the top of its reasonably tall building, having many stairs to climb, but with jazz salvation found, once this effort is made. Improvisation and moderne composed music are also presented, plus there's a recording studio attached, facilitating radio broadcasts and live album releases. A makeshift bar is separated from the performance space, serving slim glasses of the local Kölsch beer. The stage drapes are crimson, and the acoustic baffles abound, creating a cosy sonic environment.

The Loft was created way back in 1986, by Hans-Martin Müller, moving location in its first few years, then settling in this Ehrenfeld zone of Cologne by 1989. Although Müller has handed over the reins to his son Benni, he still hangs out at the venue, and your scribe chatted with him at the bar during this evening. He seemed relaxed and satisfied with the prime alternative scene that he's nurtured here over the last three decades.

The night's band was the Bastian Stein Trio, drawing a modest gathering, but delivering a fine set. Trumpeter Stein was born in Heidelberg, Germany, but grew up in Vienna and has lately settled in Cologne. His trio partners are bassist Phil Donkin and drummer James Maddren, both from England. Opening with "Comfort Zone," Donkin set up an insistent bass line, Maddren clacked out a rickety drum pattern, then Bastian emitted a fine, glowing dust via his trumpet. Maddren soloed with well-placed detonations, and the smallish audience didn't appear to believe in applauding fine results. Either they didn't have a jazz club mentality, or they were simply bashful in low numbers. "Fantasia" involved slow brushes, with prickly enunciation from Bastian, Donkin loping on the bass. The leader revealed his mute, slinking and poised for an eloquent solo, involving an impressive amount of detail. Maddren was given a gratifyingly clear run on the solo front, beginning "Traces" with another bold statement. The Monday night crowd might have been a mere scattering, but these two sets contained some alluring sounds, atmospherically clouding out of mainline jazz, but speckled with freedom accents.

Not too far away lies Stadtgarten, the city's other significant venue for challenging music (and even some more 'popular' rock and electronic acts). One of their month's highlights must surely have been this gig by Norway's eminent guitarist Eivind Aarset, also in trio formation, with Audun Erlien (electric bass) and Erland Dahlen (drums and elaborate percussion). The gig was virtually sold out, and Aarset was in gargantuan mode, shaped in delicate granite blocks by the powerful Stadtgarten sound balance.

Dahlen's extremely low bass drum was crowned with jangled bells, the flock returning, as he made brushed snare and cymbal dashes, Aarset amassing texture whilst picking faint phrases. Erlien's bass walked slowly. Cowbells and tambourine, Dahlen has it all, in his array, with the evening's second selection beginning with his delicate glockenspiel chimes. Aarset's guitar grew into a surprisingly heavy rock beast, given that your scribe has mostly caught him in recent years at the Punkt festival, where he's more likely to be sculpting strings via ethereal laptop filters. He ripped out a grainy sustain, as a stepping funk bass line hardened up, Aarset bleeding, feeding and fuming, the tune getting slinky, with outbreaks of heavy howl. Next came a frosted-grit strut, a funk-rock march, with a completely solo bass section that sounded like a Moroccan Gnaoua sintir. Dahlen took another thundering solo, but not without spreading its delicate entrails. The Aarset trio were surprisingly (and grippingly) ballsy throughout, when Dahlen wasn't cutting to bellsy..!

A showcase featuring four acts, Danish Vibes: New Music From The North acted like a micro-festival, with short sets compressed, allowing little time in-between each band. There were two stages set up within a single space, to facilitate a rolling set-up. At first it appeared that the artists would be divided between jazz and global styles, but the latter ethno-folkloric tilt ended up being the dominant quality of each combo.

Basco are a folk quartet, with violin, accordion and citterns/mandolins, also featuring guest singer Jullie Hjetland, specialising in a politely pop-orientated manifestation of roots tradition, with prim plucking and graceful circulation. Their rebellious aspect was represented by the scraped, glancing blows of Scottish fiddler Hal Parfitt-Murray. Hjetland boasted a ponytail that swung down to her lower calves, clearly not snipped since the Renaissance, her outgoing delivery adding much to the band's thrust. The Basco repertoire spotlit Nordic trad, with Anders Ringgaard switching from accordion to trombone, for a more rugged Norwegian number, picking up the pace to a clipping clop.

Warbly Copenhagen songstress Janne Mark was backed by a piano trio, setting off on a Nordic meditation with "Touched Once Again," then paying homage to Hildegard Of Bingen on "The World Is A Hymn," operating in the hinterland between jazz, folk, hymns and pop.

Bassman Kenneth Dahl Knudsen led a large group, with alto saxophone, guitar, piano, bass and drums, crafting a melodic, pastoral form of jazz, sometimes influenced by Moroccan Gnaoua music, but with the resultant tune sounding more generally Middle Eastern rather than being specifically influenced by the sound of Essaouira.

Mambe & Danochilango closed the relatively speedy run through these four acts, quite naturally, as theirs was the most outgoing sonic hit, naturally geared towards being the closing set. Their Indian-style reggaeton was hurled forth via the Colombian Mambe's upfront vocals and the Mexican Danochilango's electro-beats, plus a djembe-centred kit, the pair arriving from their dwelling in Copenhagen, full of chanting thunder, with a massive bass boom, traditional Colombian content bountifully overlaying the power-funk.

This was an interesting showcase of the Danish scene, but for a vibrant city such as Copenhagen, the selection didn't seem too impressive, and was concentrated on a deliberately more accessible, even bland, expression of various genres, often mulched together into a single package, within one band or another.