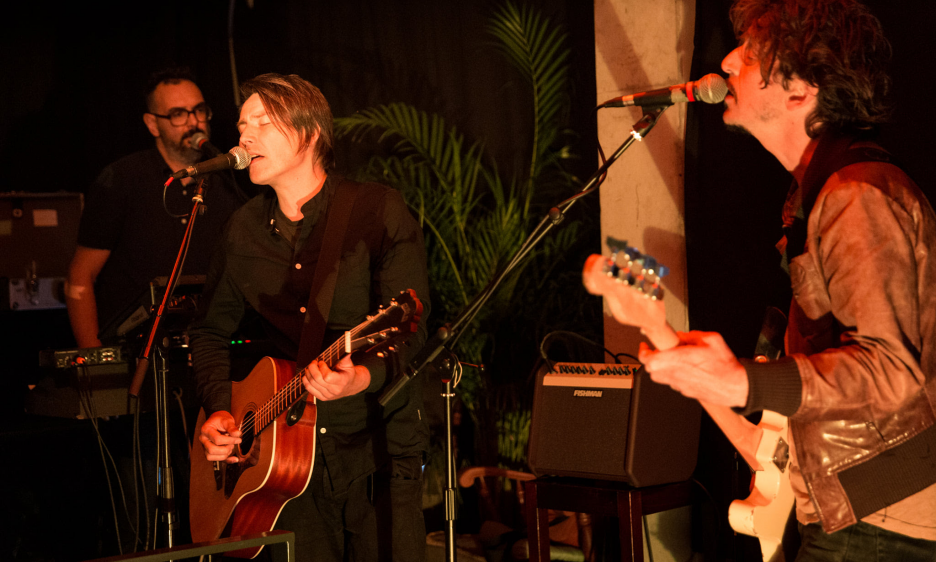 Towards the end of the Gent Jazz festival, there's an intersection with the usually much bigger Gentse Feesten street celebration. In July 2021, this hedonistic explosion was defused, but several venues presented intimate shows on the same dates, in the spirit, but with limited-size audiences. Café De Loge is an intimate bar that usually concentrates on rock or singer-songwriter acts. The owners, Mieke and Jos, are extremely music-minded, and their beer selection is highly impressive. The singer and acoustic guitarist Wolf Vanwymeersch fronted his trio, joined by a keyboardist and electric guitarist, Roeland Vandemoortele and Stijn Vanmarsenille. Vanwymeersch has lately been penning solo works, but still felt like having some help along for this gig.

All three members provided vocals, "On A Sunday Afternoon" operating in an askew pop direction, with synth hookline infiltrations, a strummed singalong with Vandemoortele also using sticks on a drum pad. Vanmarsenille switched from bass to lead guitar, and a weirdly sudden Krautrock vibe encroached. At this point the bass line seemed to be coming from the keyboard, as well as the electro-beats. A Kraftwerk pulse underpinned a strafing guitar solo, accumulating a sense of menace. Traditional roles were not clear within this multi-instrumental trio, and their commingling of responsibilities. Vanwyrmeersch mostly sung in English, with David Bowie sounding like a key influence, along with Mark Lanegan on the low vibrato parts. Banjo and 12-string guitar came out at strategic points, adding to the sparse sensitivity of this gentle psychedelia.

The Hot Club Of Gent has been co-run for the last five years or so, in its second incarnation, by guitarist Waso De Cauter. He's part of a family that's one of the significant gypsy jazz dynasties in Belgium, with musicianly blood running madly through their veins. Waso is now involved with Bar Lume, also in the centre of Gent, a larger joint that was chosen for a heavy run of gigs during the Gentse Feesten season. Admission was free, for a pair of sets each day, 4pm and 9pm, concentrating not surprisingly on the post-Django Reinhardt form.

On the 18th it was the Old Friends trio of Lafertin, Koen De Cauter and the accordionist Rony Verbiest, who further widened the palette with his orchestrally swift-wheezing box. The biggest line-up came together on the evening of the 19th, with the Rojaze.be collective, fronted by singer Nette Mortelmans, featuring flute, clarinet and saxophones, with accordion, bass and the returning Baculalay, Koen and Waso. The unusual repertoire traversed songs in Dutch, French and English, blending gypsy ditties with American jazz and show tunes, even managing to present an individual manifestation of "When You're Smiling." All of the members played exceptionally well, criss-crossing their rapport relationships in a dazzling show of variation and joyfulness.

The last set attended by your scribe was on the afternoon of the 20th, a solo showing by the folk singer and accordionist Wim Claeys. His storytelling, and his song-words were mostly a mystery, in Dutch, but they still rang with bright humour in their phrasing, as accordion keys were flown over with fleet skill. It seemed like he might be the Loudon Wainwright III of Flemish traditional music.

On the same days, there was a completely different scene at Missy Sippy, once again situated in the city centre. Straight off, the organisers choose to spin a fine selection of hardcore blues music over their sound system, in preparation for the live acts. Secondly, the rooms of rest are completely covered with old clippings from blues magazines and newspapers. Thirdly, they have a fine selection of beer and cocktails. Missy Sippy opened in 2015, pretty much keeping strictly to a blues and roots calendar, mostly favouring the old acoustic or semi-acoustic form. Most of the acts during this season were duos, prompting close exchanges.

There were two sets each day, some freebies and others ticketed, with a limited audience capacity. This meant that the same artists played twice, at 5pm and 8pm. As if to underline the club's old school bias, the first song that Simon Raman and Matis Cooreman (16th) played was "Grinnin' In Your Face" by Son House, although in smoothed-out form, compared to the original. It was followed by "Baby, Please Don't Go," with resonantly twangin' guitar from Raman, slow vocalisations extended, drawn out and mulled around, with high notes crying on Cooreman's mouth-harp. The pair interpreted Captain Beefheart's "This Is The Day," using 12-string guitar, although that song comes from one of his most mellow albums, Unconditionally Guaranteed. The vocals were slightly weak on "Sweet Little Angel," with a kind of Thom Yorke whining tone. The second set tended to lose its blues way, with Bob Dylan's "Just Like A Woman," both dudes delivering in quite high voices. They very unexpectedly selected "TV Eye," by The Stooges, with a bleeding, overloaded harmonica solo, bolstered by a foot-drum-kick.

Roland Van Campenhout is a veteran Gent bluesman, more usually appearing simply as Roland. He appeared with the harmonica player Steven De Bruyn (17th), taking the blues into different places, thanks to liberal use of special effects. The songs remained 'purist' in style, nevertheless, with looping and tweaking not interrupting the flow of downhome rootsiness. Roland has played bigger gigs at the Gent Jazz Festival over the years, including a masterful homage to the compositions of Moondog. His guitar was given a ringing, tingling sitar sound, while De Bruyn blew harp that had a chocolatey coating of effects, trailing a deep loop behind him. The sizes of his harmonicas ranged from a substantial bass beast down to a tiny triller. One number was instrumental for quite a stretch, but Roland eventually sang, in a hillbilly holler, getting into a Beefheart growl. De Bruyn grunted out a looped rhythm, like a beatboxer, making atonal huffs and parps. This was very much the alternative blues, within the old form, but slanted askew. Roland made his guitar sound like a banjo on "Freight Train," then for "Nature Boy," De Bruyn looped his mouth-harp to create a cello section sound-alike. Appearing again, the day after its Bar Lume showing, "St. James Infirmary Blues" had Roland leading with his gravelly vocals, his guitar phrase repeating, extending the singing phrases, and making the song breathe with fresh life. There were fine renditions of "No Expectations" (The Rolling Stones) and "Boom Boom" (the John Lee Hooker classic), for an encore.

Ismael Ndoye and Rafaello Visconti (19th) shared joint vocal and guitar duties, the latter starting off with a small headless axe that looked somewhat like a West African n'goni hybrid, although many of the pair's songs veered towards mainstream pop. Most of the interest lay in Visconti's guitaring, rather than the actual compositions, with one tune sounding similar to "Guantanamera." The second half found Visconti on a more conventional-looking axe, and the material adopted an Afro-feel, with extended exchanges between the guitars, and an emerging reggae vibration. Often the songs were hardly songs at all, acting as frameworks for jamming and general audience encouragement. A Sting ditty transformed into "An African In Paris," marginally improving on the original, and with the Senegalese Ndoye singing in French. Puzzlingly, much of the audience seemed to enjoy this one the most...