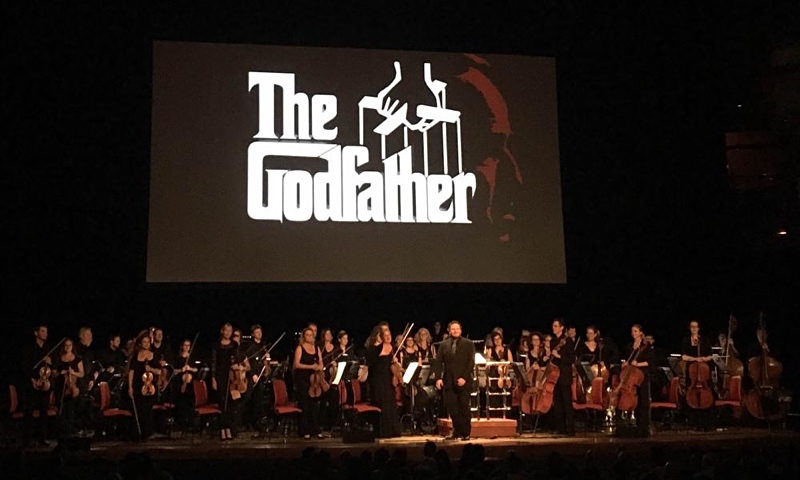 By MARTIN LONGLEY
October 9, 2016
Sign in to view read count
The Godfather, with live accompaniment by The Manchester Camerata Orchestra
Symphony Hall
September 16, 2016

There seems to be a growing tendency for talkie screenings with live musical scoring. Back in the day, it was only silent movies that received the fleshly musician treatment. Current digital technology makes it easier to use a 'print' that excises the original score, allowing an onstage group to drop in their real time performance, noticeably, yet unobtrusively. This is the key to live scoring. The whole idea is not to be too much of a distraction, but when the audience has shelled out their top dollars to witness a live show, surely they'd like to at least notice the players on some level. It's a very delicate balance. This is, after all, a movie, and not a gig. Even so, the Manchester Camerata Orchestra were actually arrayed on the stage, rather than down in the pit, the screen suspended from the hall's high ceiling.

Ultimately, all was well, despite the constant presence of subtitles on the 2008 digital restoration, even though most of the dialogue is in English, albeit mumbly Mafia English, its subtleties matched in with the eternal gloom of the film's first half. It's a long stretch, by the way, almost three hours of epic, but thankfully with an old school cinema intermission. Oddly enough, the only portion lacking in subtitles was the brief outbreak of actual Italian dialogue. Even though, whilst personally experimenting with ignoring the subtitles, a few phrases might be missed, it's arguable that this is a reasonable sacrifice, if they were to be dropped altogether. Sometimes, even these lines sounded at odds with what the characters were actually saying.

Initially, there were fears that the 1972 classic had dated, with its early progress operating on an extremely low curve, murky in the extreme. But as the carefully-told tale unwound, and the audience settled into the clotting-blood flow, the film gradually got better and better. A modern-times crowd might be too desensitised by the high event-count of the present day televisual box set experience, where every moment features a shock revelation, or a sudden orgy of emotional or physical excess. The dimness flashed into Sicilian colours for the second half, and Michael Pacino began to fully surpass Marlon Corleone in ruthless body-counting. The Camerata weren't even massively noticeable. That's how good their interpretation of this classic Nino Rota music was, seamlessly inhabiting the dramatic subjectivity. The early wedding ceremony scene gave the opportunity for folk dances, heavy on the basses and percussion, with the orchestral swellings perfectly cued throughout, the themes mostly acting as a reflective, tension-releasing facilitator, following a bout of near-silent drama. So, mostly, the players were not in competition with the dialogue, their true potency revealed during these thematic swellings. We await the MCO's interpretation of The Godfather: Part II with keen anticipation!

As with most traditional folk bands, The Gloaming enjoy stringing two or three tunes together, but their difference is that these are often original compositions, and are also stretched out for an extended development, slowed, savoured and sliding through several movements. This isn't a riotous, friction-filled session, as these mostly Irish players possess the delicate grace of the classical chamber group, their two fiddles criss-crossing lines with faint harmonies and seamless softness. This is to The Gloaming's advantage, making them stand out alone in this field. The two fiddlers are Caoimhín O Raghallaigh and Martin Hayes, the latter famed for his duo work with Chicagoan guitarist Dennis Cahill, who is also a band member. New York pianist Thomas Bartlett (also known as Doveman) and Irish singer Iarla O Lionáird complete the line-up, the latter sometimes playing harmonium. The Yorkshire composer Gavin Bryars has written several pieces for O Lionáird (who specialises in the delicately haunting sean-nós style) and he was present in the audience. O Lionáird delivered several songs a capella, deepening the atmosphere, but continuing the same concentrated feel. The fiddlers will also work together for stretches, before being joined by the remaining players. All of these permutations added to the varied dynamics of a set that hovered around the 100 minute mark. Towards the finish, "Song 44" provided a particular highlight, with Bartlett gently hammering his keys, the other hand lost under the piano lid, O Lionáird making a rhythmically enunciated vocal progress, whilst the fiddles sung along in melancholy sympathy.

It's a Monday night, and The Tower Of Song has booked an American bluesman, complete with his full touring band. This could be a risky situation, but the Kings Norton roadhouse is already full, as opening local Birmingham act Big Wolf are taking to the stage, and as their set progresses, all seats are grabbed and the standing room is looking not-so-roomy. This roots music bar runs a regular Thursday night blues session, and it looks like a similar population is also coming out at the week's beginning. The Kirk Fletcher Band sings and plays guitar, having grown up in Los Angeles, where he met Kim Wilson, contributing to that harpman's solo albums. This led to an invitation from Wilson to be a member of The Fabulous Thunderbirds for three years. Fletcher has laid down four of his own albums, and has also played with harmonica master Charlie Musselwhite.

Big Wolf delivered an appealing set of rock blues, but Fletcher's combo strode off into an equally hard sound, although revolving around more of an amplified blues-root Chicago feel. Even grittier, and with less of the rawk inflections. Fletcher doesn't hog all the solos, sharing out between the slowly developing line of aspiring axemen jammers, as the extended set metamorphoses into a steaming sequence of sitting in (or standing, as there's no place for relaxation on this hot-wired platform). Fletcher avoids selfish exclusion, probably because he's confident in his own inflammatory abilities. The clutch of guesting guitarists acquit themselves well, helping stoke an atmosphere of escalating competition and loosened expression. For the last run, Fletcher's crew are left alone, and he takes out the gig with some soulful,funky fire, solos screaming out into the incongruous south central Kings Norton night. Not bad for a Monday evening, and approaching any Saturday's best showing!