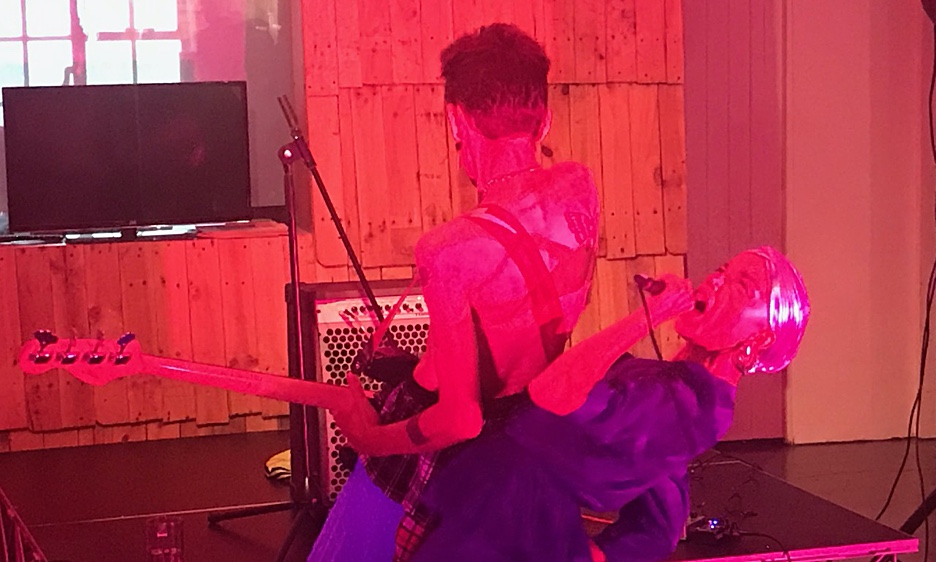 As unto a deep folkloric tradition from Poland, the duo of Siksa are viewable as conduits for contemporary social observations, the punk-noise descendants of ye olde troubadours, spreading a torrent of words across a manure field of distortion. The Centrala art gallery in Birmingham is jointly operated by a Polish curator, which leads to a spellbinding flow of generally Eastern European exhibitions, and sometimes gigs. Siksa played here last year, but this gig was your scribe's first exposure. Vocalist Alex Freiheit didn't cease her prodigious verbal flow for a moment, once the performance began, spewing speedy syllable orations that moved with high phrasing agility, pacing the entire gallery, confronting each audience member, but not aggressively, more intently and diligently, frequently side-stepping into urgent song, or shaped screams, to prove that she slams well beyond poetry or tumbling-content narratives.

Bassist Buri was a more introverted presence, keeping to the rear, back to audience, axe slung low, as he churned out washed-layer frequencies that existed more in the lead guitar realms than the four-string depths. Freiheit was garbed something like an exotic 1920s jazz chanteuse-cum-opium addict, straight out of a pulp horror-detective-mangling novella, but sounding more distinctly 1977. Buri wasn't wearing a shirt, but his pantaloons had already used up all of the available fabric. Of course, the majority of the audience probably weren't fluent in Polish, so were missing out on a significant aspect of the show, but as with all global sounds, it's not usually necessary to have the particular language, being left released, to concentrate on the sonics, the phonetic attitude, the stance and the delivery. Some portions of Freiheit's text did come out in the English lingo, though. This was one of the most stirring, confrontational, sonically disruptive gigs witnessed in a long stretch, and surely Freiheit has a background in theatre or dance, or is maybe simply an instinctive outsider operator.

The veteran Brooklyn singer, flautist and keyboardist Brian Jackson also has deep connections with the music of social comment, even if only via his substantial partnership with fellow American Gil Scott-Heron. This set at the Mostly Jazz, Funk & Soul Festival found him heavily concentrating on that repertoire from the 1970s and '80s, taking over the vocal duties from his old Chicagoan collaborator, now departed.

Jackson was making a return to Birmingham less than a year since his gig at The Jam House (covered in a previous Live From Birmingham All About Jazz column), and the set hadn't changed so much, apart from the fact that it was shorter and sharper, edited down into festival form (and he left his acoustic piano at home). Even though this trio received an enthusiastic response during the 2018 gig, the whole scale was magnified here in a sold out Moseley Park, its natural, rollin' amphitheatre full of folks who were either camped out on rugs for the day, or surged down to the front of the stage, to catch a close-up glimpse of activist soul-funk-jazz, thereby ideally fulfilling the ethos of this long-running festival.

Drummer Chris Morris often had too much of a crashing rock sound to his full-size kit, but bassist Yolanda Charles is an expert in producing limber, hookline bass shapes. Not surprisingly, it was "The Bottle" that fully aroused the masses, with Jackson free to meet the crowd out front with his powering flute solos. Some songs were casualties of the shorter set-length, but the mission of this show was winningly altered by its prime early evening placement on the festival's main stage. It's worth noting that this annual event is a key fund-provider for this independently-run park.

The poetry of the blues is usually more earthy, direct and stripped of surplus finery. Brooklyn's Daddy Long Legs were touring the UK again, digging down into this basement Sunflower den of flashfire boogie, r'n'b, distorto-soul, rock'n'roll and punky-Diddley. Like an even seedier Stones, this decade-old trio weighed into a hypnotic pulse, driven by their naturalistic affinity with the uninhibited blues-raunch life. They dress like they live for the 1960s, where garage rock collides with downhome sentiment, but at way higher volume excruciation levels. Rarely does your scribe cringe at shrill vocal distortions, crushed and crumpled though his eardrums are, through long-term and deliberate abuse, but such was the sound coming right outta DLL's microphone.

As the intensity magnified, the frontal gathering began to dance, this rag-bag mixture of old blooze soldiers, medium-aged tattooed-rockabillies and stripling alternative rock freshbloods. As with Siksa, we tend to think of the bandname being the moniker of the front-person, but technically, Daddy Long Legs is the dude born as Brian Hurd, testifying, blowing mouth-harp, and sometimes picking up an electric guitar. Murat Akturk resonates sliding strings of his own, and Josh Styles operates in the extreme minimal percussion zone, brutally smashing his maracas in the name of syncopation, sticking to the most stripped 'kit' you're likely to witness outside the realms of hardcore snare-only free improvisation. Much leaping off the stage ensued, as the band met their audience more than half way, lost amidst the shaking heads, electrifying this deranged cellar of the tolling 12-bar freak-out.