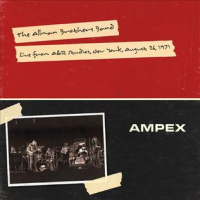 Sacrilegious as it may sound, the Allman Brothers' performance on Live From A&R Studios New York August 26th 1971 is superior to At Fillmore East (Capricorn, 1971), heretofore regarded as the definitive document of this seminal southern rock band's on-stage expertise. After prior bootlegging in a variety of forms, the recording of the former has been mixed from the master tapes under the supervision of Bill Levenson, the overseer of the Dreams box (Polydor, 1989), and as such is the pinnacle of the group's archival efforts to date, with the possible exception of that four-CD set or Play All Night: Live at the Beacon Theater 1992 (Sony/Legacy, 2014).

It only stands to reason the Brothers would be even tighter as a unit for this show some five months after their three epic nights in March at Bill Graham's hallowed New York venue. The sextet was still touring relentlessly to maintain the momentum of the constant roadwork leading up to, but certainly not culminating with, the release of their renowned live album just the prior month. In fact, the late impresario specifically called upon the Brothers to close the eastern wing of his operations in June of 1971 (performance from which comprise the second CD included in the 'Deluxe Edition' of Eat A Peach (UME, 2006) and is also included in The 1971 Fillmore East Recordings (UME, 2014).

Yet there were other factors in the Allman Brothers' favor this late summer night that only served to further elevate the level of inspiration in their playing. The small room could only accommodate an intimate audience (estimates range between one hundred-fifty to two hundred) and this confined space also required the band set itself up in something of a semi-circle, all the better to enhance the already uncannily sensitive, some might say, telepathic nature of their practiced improvisations.

Thus, it only stands to reason the de rigeur opener, "Statesboro Blues" sounds even more streamlined and powerful. Or that "Don't Keep Me Wonderin''" would encapsulate the swagger of the Brothers, their ever increasing confidence rooted in their rigorous work ethic as well as earliest indications of breakthrough sales of their concert album. If the fearless swooping and diving of his slide plying on those aforementioned tracks wasn't clear indication enough of how pumped was founder and co-namesake of the group Duane Allman, listen to his clearly audible count offs for numbers like "Done Somebody Wrong." Or his intros to virtually every tune: he couldn't wait to start another song almost as soon as one was done.

Of course, ABB had a time limit to observe here in this presentation destined for not only recording, but broadcast on WPLJ FM radio and it was one markedly shorter than their usual stage allotment. As a result, the Allman Brothers Band was inclined to pour it on here and for close to seventy minutes they did. And never more potently (or expansively) than on the longest track here: at nineteen and a half minutes including a heartfelt verbal homage to King Curtis from "Skydog," (so nicknamed by Wilson Pickett) with whom he had played many a studio session and who had been killed just a couple weeks prior to this occasion, "You Don't Love Me" contains not only a full reading of the late saxophonist's signature song "Soul Serenade," but an interval near the end where Dickey Betts almost, but not quite, steals the thunder, literally, from his guitar partner (ultimately illustrating how his fluid manner complements Duane's more staccato approach, the chemistry of which mirrors the individual drumming styles of Butch Trucks and Jaimoe).

This intense but dynamic interplay is in addition to a reading of "Stormy Monday" so passionate it might define Gregg Allman's legend as a contemporary blues man, while a reading of Betts' instrumental "In Memory of Elizabeth Reed" reveals the soft touch of bassist Berry Oakley, he the author of the thundering intro to the customary ABB set closer, "Whipping Post." Due to the time constrictions previously referenced, the Allmans replaced that latter number this night with "Hot 'Lanta," the group-composed instrumental that, for all it's concise economy, nevertheless stands as a microcosm of the dark drama at the heart of their music.

John Lynskey's lengthy, fact-filled essay in the booklet inside some homely cover graphics offers an interesting backstory to A&R, but it's nowhere nearly so arresting as the music upon which it's based. Containing the core of the ABB repertoire of the time-"Trouble No More " and "One Way Out" are both here in compact renditions-but missing those warhorses that could become epics (It's not just "Whipping Post" that's missing," but "Mountain Jam" as well), Live from A&R Studios New York August 26 1971 cannot supplant At Fillmore East, but the purity of the performance brings its closer to that peak than even the most devoted Peach-head might imagine.

As such, it is not only an essential entry into the discography of the Allman Brothers Band, but should provide something of an indirect gateway into their storied musical heritage for the novice who wants to avoid the preconceptions that might arise from higher profile titles.

Statesboro Blues; Trouble No More; Don't Keep Me Wonderin'; Done Somebody Wrong; One Way Out; In Memory of Elizabeth Reed; Stormy Monday; You Don't Love Me / Soul Serenade; Hot 'Lanta.