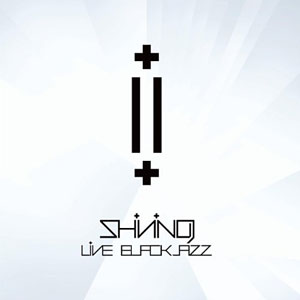 With Blackjazz (Indie Recordings, 2009), the transformation of Norway's Shining from metal-tinged jazz fusion into something, well, other was complete. An ear-shattering combination of death metal/grindcore growls, crunching guitars, John Bonham-style drums reinvented for the new millennium, outrageous virtuosity and progressive rock complexities, this brainchild of guitarist/saxophonist/vocalist Jørgen Munkeby—here, as with everyone in the group, referred to by last name only—suggests a new kind of expressionism, one that's predicated on a spirit of jazz but with almost no direct references to its longstanding tradition.

Almost, because when Munkeby picks up his saxophone and starts to blow over the group's relentless energy, there's little doubt that his references are more Albert Ayler than Accept, more Brainkiller than Black Sabbath. Still, there's no doubting Munkeby and Shining's predilection for metal's defining characteristics, but there's an underlying intelligence that makes them more than just a fist-pumping, head-banging touchstone, though it's clear, from both its 2010 Kongsberg Jazz Festival performance and the DVD of the two-disc Live Blackjazz, that here's plenty of that going on, too.

With a set list that's similar, but not identical on the CD and DVD, Live Blackjazz culls five tracks from Blackjazz, and another five from its previous Rune Grammofon titles, 2007's Grindstone and 2005's In the Kingdom of Kitsch You Will Be a Monster, but the older material is reinvented for Shining's new persona, and works even better. Bernt Moen's synths and mellotron samples are undeniably proggy on "Winterreise," and the light-speed classicism of its theme, doubled by Moen and Munkeby (on EWI; Electronic Wind Instrument) possesses all the sturm und drang of the original, but amped up not just to eleven, but to twelve.

There's no doubt that Live Blackjazz doesn't just deserve to be played loud, it demands it, but that doesn't mean there isn't a logical flow in the set, one that imposes an unmistakable ebb-and-flow, even if earplugs are mandatory for even the quietest moments. A veteran of everything from trumpeter Mathias Eick's lyrical melancholy on Skala (ECM, 2011) to violinist Ola Kvernberg's dynamics but considerably more subdued blend of form and freedom on Liarbird (Jazzland, 2011)—drummer Torstein Lofthus—doesn't just keep the fire in the engine room burning alongside bassist Tor Egil Kreken, he's like a controlled nuclear explosion, one that often threatens (but never thankfully delivers) complete sonic annihilation.

Unlike Blackjazz, where he shared vocal duties with guest (and paradoxically monikered) Gentle Kjellson, Munkeby is the sole vocalist here—and the clear and present front man, whether he's screaming into a microphone, delivering searing howls on saxophone or doubling guitarist Håkon Sagen on the nightmarishly complex "Healter Skelter." And, if Blackjazz's version of King Crimson's seminal "21st Century Schizoid Man" represented sheer anarchistic nihilism, here, in an extended, 12-minute set-closer, Munkeby and Shining's credentials as the absolutely heaviest band to ever reference the word jazz are complete.

If Blackjazz was a progressive metal masterpiece, Live Blackjazz takes it one step further, with the unfettered power and unrelenting energy of live performance. One warning: advance heart exams mandatory for those over forty.