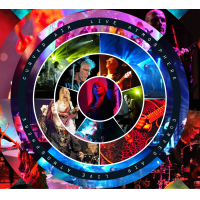 Upon its inception in 1970, Curved Air became a prominent exponent of British progressive rock, fronted by vocalist Sonja Kristina. Superb musicianship was a forté, spawning notables such as keyboardist Francis Monkman, keyboardist/violinist Eddie Jobson and violinist Darryl Way. Fast-forward several decades and Kristina and original band drummer Florian Pilkington-Miksa reorganize the unit with a new faces, yet sustain the core group sound and tradition via this impacting live CD/DVD release, culled from its 2010/2011 Live Atmosphere tour.

"Marie Antoinette" is one of the ensemble's signature works, first appearing on Phantasmagoria (Warner Bros, 1972). Like most of the other tracks on this album, Kristina sings with gusto, tinted with misty overtones amid a true sense of ownership, adding to the album's surging impetus.

Keyboardist Robert Norton repeats a spooky, flute-like Moog riff that transcends the theme-building efforts into a memorably melodic, yet somber etude, alternated by the musicians scorching straight-four rock vamps. Also treated with distortion-laced guitar leads, rocketing violin passages and a bridge, developed with circular piano phrasings and the soothing synth lines, the group raises the intensity, yet tempers the pitch with a distinct sense of prog-based regality, crashing and burning, however, for the finale. It's wonderful to hear this touching work after all these years, although the band beefs it up with a rockier edge when it zooms in for the kill.