By John Sharpe
November 8, 2012
Sign in to view read count 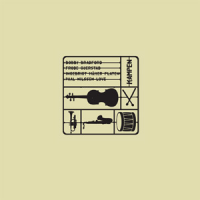 If Kampen sounds like old friends settling down to chew the fat, then that's because that's exactly what's happening. Norwegian reedman Frode Gjerstad has waxed ten discs in the company of veteran American cornetist Bobby Bradford since they first met on tour with drummer John Stevens in England in 1986. However, this 46-minute live LP stands as one of their best since Through The Woods (CIMP, 1997). All four cuts are spontaneous compositions, the product of collective listening and playing at a very high level. They generate an organic flow which draws on all the available permutations inherent in the foursome.

The fervent interplay between the two horns is one of the enduring traits of their partnership. Bradford's earthy cornet forms the perfect foil for Gjerstad's sinuous spiraling clarinet and wiry alto saxophone. A stuttered reveille comprises the basic building block for the American, which he deploys in a variety of guises, from the breathy fragments in dialogue with Ingebrigt Håker Flaten's muscular bass at the start of "This Is," to the sprightly fanfares atop drummer Paal Nilssen-Love's crisply rolled crescendos at the outset of "A Live." Bradford's insistent clipped phrases mesh well with Håker Flaten's purposeful strum to create a firm foundation which allows the reedman and drummer to roam both more widely and wildly.

Fine moments abound throughout. Gjerstad makes an explosive alto statement on "Recording From," tonally diverse, exciting and unpredictable, while on "Kampen, Oslo" Bradford essays a quizzical lyricism, like someone whistling a half-remembered tune, all the while goosed by Nilssen-Love's squally tattoo. On the same piece, the bassist steps out for a powerful plucked excursion, where his forthright physicality adds a percussive dimension to his woody melodicism. But notwithstanding the excellence of the individual parts, it is in the cockpit of intense group exchange that these four triumph.

This Is; A Live; Recording From; Kampen, Oslo.