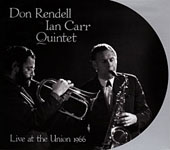 During its five-year run, the Don Rendell Ian Carr Quintet was one of the UK's premiere small ensemble jazz groups. Five albums on Columbia didn't hurt either, from 1965's Shades of Blue through to 1969's Change Is, where dissention ultimately resulted in the band's dissolution. Sometimes it's for the best, though; saxophonist/flautist Rendell continued on in a relatively mainstream fashion, while trumpeter Carr created one of the UK's earliest fusion groups, Nucleus, featuring (at various times) guitarist Allan Holdsworth, drummer John Marshall and keyboardist/reed multi-instrumentalist Karl Jenkins, who all found their way to Soft Machine later in the '70s.

Like the quintet's commercial release Live (Columbia, 1968), the recently unearthed Live at the Union 1966 demonstrates that the Don Rendell Ian Carr Quintet may have been more polite in its studio outings, but live possessed no shortage of firepower. The mono tape—rescued by its original recorder, George Foster, from a box under Carr's bed when, in 2007, the Alzheimer's suffering trumpeter was sadly moved to a care home, passing two years later—is an earlier date and could, some might suggest, suffer from the departure of regular bassist Dave Green after the first two of its six songs, replaced by dep Tony Reeves. But that would be a mistake. This somewhat lo-fi (though certainly clear) recording—made at the relatively intimate and informal Student's Union Bar at University College London—finds the group in a particularly loose and unfettered mood.

The quintet also benefited from stable personnel, with pianist Michael Garrick joining Rendell, Carr, Green and drummer Trevor Tomkins following Shades of Blue. By the time of Dusk Fire (Columbia, 1966), the quintet had become a hard-working group, and the results are in clear evidence on this set of original compositions, largely written by Garrick, with the exception of one collaboration with Carr and "On"—the up-tempo opener that sets the stage for this largely high-powered set and the only song previously recorded by the quintet, attributed to Carr in its studio version on Phase III (Columbia, 1968) but credited here to Rendell.

The quintet was heavily rooted in the American tradition, as titles like the (not surprisingly) modal workout of "Trane's Mood" and more relaxed blues of "Webster's Mood" would suggest. But the waltz-time swing of "Carolling" and, in particular, the Garrick/Carr closer, "Hot Rod," demonstrate unexpected hints of European classicism, even as the latter brings the house down with some of the intense frontline interaction that made the quintet such an exciting part of the UK scene.

The 70-minute set also demonstrates why longstanding groups are most often the best ones. Given time to get to know each others' strengths, foibles and peccadilloes, the Don Rendell Ian Carr Quintet turned from a relatively well-mannered group into one that, despite its obvious straight-ahead touchstones, wasn't missing the free bop of Miles Davis's mid-'60s quintet . Live at the Union 1966 is an important find, placing this group back on the radar. Further, it is a terrific place to hear where the ultimately more forward-reaching Carr really began to hone his chops and vision.