John McLaughlin and the 4th Dimension: Live at Ronnie Scott's

By Geno Thackara
September 10, 2017
Sign in to view read count 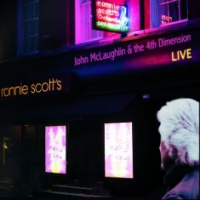 Music has taken him and his guitar to some of the most exotic far reaches of the world, but Ronnie Scott's Jazz Club will always have a special place in John McLaughlin's heart. His mid-1960s time in the famous London venue's house band was a key early step in his musical life, and he idly wonders "where would I be without them?" five decades later. No doubt he would still be a legend today; such boundless curiosity and imagination would have led him to some adventurous path one way or another. Nonetheless, this homecoming show of sorts provides the perfect occasion to celebrate a scorching group at the top of their game.

That affection for the club contributes to this live set's special vibe, though of course there are many factors at work. Things are consistently taken to another level when McLaughlin can settle in and gel with one consistent band (as exciting as the studio constructions or occasional brief projects can also be). The 4th Dimension makes his all-time longest-running ensemble (formed in 2007, with this lineup since 2011) and it's become the most expansive and versatile group the guitarist has ever had. More than any previous outfit, even the top-flight Five Peace Band of 2008-9, this quartet can handle his globe-spanning range with a virtuosity and interplay that are downright uncanny.

This was plenty in evidence on their previous live release The Boston Record (Abstract Logix, 2014), but the three years between leave them even more keenly in tune with each other on Ronnie Scott's. Admirers of the Mahavishnu Orchestra will be delighted with the return of a few chestnuts from that band's first two albums—the audacity of the compositions hasn't dulled with age, though their renditions here have the inevitable seasoning of maturity as well.

The players may hit McLaughlin's trademark blizzard pace fairly often, but they trade their brisk solos and dash off their complex dialogues without any gaudy grandstanding. Gary Husband's electric keys conduct a sprightly back-and-forth with Etienne M'Bappé's bass through Mahavishnu's "Miles Beyond," while an epic take on "Here Come the Jiis" positively sizzles thanks to Ranjit Barot's frisky drumming and use of konokol (a percussive vocalizing used in traditional Carnatic music). The piece takes him and Husband to heights of rhythmic joy in a most fitting dedication to Shakti's master mandolinist U. Srinivas.

Honoring departed friends sadly makes a recurring theme here, as "El Hombre Que Sabia" (The Man Who Knew) pays similar homage to McLaughlin's guitar partner Paco de Lucia (Husband's angular keys conveying the subject's uniqueness admirably). Still, it's only right to mark such notes in a set that ranges throughout the guitarist's career, and the band does them justice with performances full of life. Those tribute pieces and the thoughtful-but-not-maudlin "Gaza City" are the newest ones here, taken from 2015's Black Light (Abstract Logix), and all eloquently stand alongside those classics from decades past. The time in between has made a long and winding journey, but the inner flame burns undimmed even fifty years on.