BY NENAD GEORGIEVSKI
December 18, 2017
Sign in to view read count 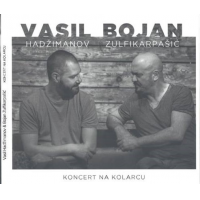 The duet album between two simultaneously very similar and very opposite musicians, pianists Vasil Hadzimanov and Bojan Zulfikarpasic documents their two encounters that occurred in February and October 2015 at the prestigious concert hall in Belgrade, Kolarac. Both musicians have their distinguished careers in often different branches of jazz, have different sensibilities and yet they still find mutual ground and communication because of which this set is strangely engrossing. These two hit a remarkable rapport during the performances and that rapport is very evident on this recording.

Often the pairing of two piano virtuosos who are trying to out-magic one another can create a lot of friction and heat rather than illumination. When two of them are unleashed simultaneously it can be challenging but luckily there is a balance between virtuosity that is based on mutual respect. This suggests that this encounter was a huge pleasure and fun for both sides. As a result, we are treated to graceful, tuneful, occasionally challenging and often boisterous interpretations of tunes from both artists' catalogs. Frankly, both of them are old pros as duet players. Their playing together remains brilliant all throughout—unified, sympathetic, and deeply creative. Both of them dive deep into their catalogs and deliver a rapturously received set that ranges from jazz lyricism to improvisatory meanderings and classical leanings. The set starts with the Zulfikarpašić's playful "T.N.T." but also contributes with songs such as "Nedjalkos Eleven" "Multi Don Kulti" that sit well with Hadžimanov's tracks such as the classic "Ohrid," "Nocturnal Joy" and a yet to be recorded track with the VH band "Rege Hadzi." The set also features one cover or an amalgamation of a traditional song "U Ranu Zoru" and the tune from the famed Fellini's Amarcord soundtrack by Nino Rota.

All throughout these 8 tunes what impresses is how closely these two listen to each other, as they complement one another and they play harmonious improvised unison lines or play counterpoint. Also, they both avoid competing with each other and they have refrained from displaying all their wares at once. Ultimately, this duet has a synergistic spark and depth with a powerful duality that lends their collaborations here an enduring quality.