BY IAN PATTERSON
December 18, 2017
Sign in to view read count 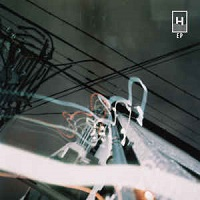 Compositional frameworks appear to consist of leading melodies and little else, because for the most part Thunderblender's dialog is created on the fly. The opening melody of "Bozza" is revisited by Comerford on tenor saxophone several times in between improvised passages where the lead changes between leader and pianist—recurrent motifs acting as vamps from which one or the other uses as a springboard for mazy explorations. Bouttery is a restless provocateur, prodding and cajoling the whole time. He displays a wide rhythmic palette, from hip-hop and drum 'n' bass to more personalized expressions, while his bass synth adds low-end grooves that are felt rather than heard.

After "Kwakzalver"'s restless intro, a joint piano and tenor vamp sparks a pounding bass drum pulse, which soon ignites a feisty drum improvisation. Stabbing piano chords and fluttering tenor motifs lock into symbiotic, gradually evolving groove, moving closer towards each other's orbit before the trio unites in a punchy, choreographed finale. Comerford switches to bass saxophone on the title track, his growling ostinatos—with Bouttery finely attuned—serving as a launching pad for Lasure. A bout of tightly coiled rhythmic sparring gives way to a looser dialog of lyrical introspection between piano and saxophone—though not without attendant tensions—with Bouttery on brushes.

Brushes also underpin "Toetje," which straddles a course between softly treading melodicism—lead by Comerford's tenor purr—and more purposeful collective stride, with Lasure in particular bursting free in playful, tumbling exuberance. In the end, though, as in the beginning, the trio's hushed voicings cast a gently alluring spell.

The evident chemistry between Comerford, Lasure and Bouttery results in intricate, adventurous play that's never predictable. Even in Thunderblender's most intense improvisational flights there's an abiding sense of the three musicians locked on the same intuitive wavelength, whereby freedom and control are but two sides of the same coin. Gutsy yet melodic, rhythmically complex yet grooving, there's plenty to admire in this fine debut.