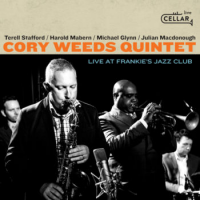 Yes, this is saxophonist/master of all livelihoods Cory Weeds' quintet, the year is 2018, and the group is beyond a doubt Live at Frankie's Jazz Club in Vancouver, British Columbia. But close your eyes, open your ears and it's the unapologetic re-creation of a quintessential hard-bop session from the historic Blue Note / Prestige years of the 1950s-60s. Indeed, to underscore the point, the quintet's pianist is the venerable Harold Mabern who actually performed and/or recorded back in the day with such giants as Lee Morgan, Jackie McLean, Freddie Hubbard, Tina Brooks and a who's who of celebrated masters from a glorious age that may never return but whose legacy rests secure in the earnest hands of Weeds and his dexterous teammates.

The buoyant concert gets under way on an assertive note with Morgan's walking "Bluesanova" (introduced by Michael Glynn's resonant bass) and segues into Mal Waldron's lyrical "Mood Malody" before delving into impressive original compositions by Brooks, McLean, Walter Davis Jr. and Swiss alto overseer George Robert. Davis' three-quarter time "Formidable" is one of several highlights with the ensemble in lock-step to undergird perceptive solos by Weeds, Terell Stafford and Glynn.

Brooks' freewheeling "Up Tight's Creek," which follows, offers more of the same with Stafford's nimble trumpet brightening the landscape, Weeds in blue-chip form and Glynn adding another thoughtful statement. McLean, whose high-speed "Consequence" is heard earlier in the program, caps the evening with his sunny Caribbean-flavored "Tolypso" and "The Three Minors," whose irrepressible tempo and boppish licks epitomize the time in which it was written. Weeds, Stafford and Mabern are in superior form again, as is drummer Julian MacDonough who adds another driving solo on "Consequence." Robert (Weeds' longtime mentor who died far too soon, in 2016) wrote the handsome ballad "Fabienne," on which Weeds is featured, Brooks the smooth, Latin-leaning "Gypsy Blue," wherein Stafford, Weeds and Mabern are at their self-controlled and lyrical best.

While tipping their hats to the past, Weeds and his able colleagues prove conclusively that music of this caliber is essentially timeless. A superior concert in every respect, one that should especially gladden the hearts of those who call to mind with fondness the short-lived but incomparable era of hard-bop jazz.