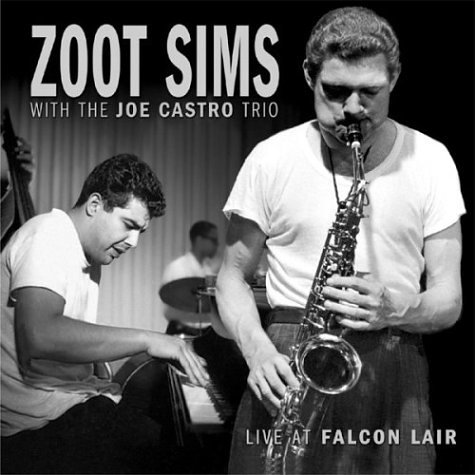 This loose-limbed rendezvous sounds exactly as it was, an impromptu late-night jam session planned on the fly in someone’s apartment—in this case, however, no ordinary apartment but “The Playhouse,” a spacious second-story room above a garage and adjacent to the main house at Falcon Lair, the imposing Beverly Hills estate then owned by tobacco heiress Doris Duke and previously occupied by legendary silent film star Rudolph Valentino. Pianist Joe Castro, who was married to Duke from 1956-64, liked to invite his friends over for unrehearsed get-togethers, and one frequent guest who would blow anytime, day or night, at the drop of a downbeat was the irrepressible Zoot Sims.

An unusual aspect of this particular session is that Zoot brought only his alto sax, not the tenor for which he is much better known. Not to worry; if he hadn’t been such a great tenor stylist, Zoot would certainly have been numbered among the best alto players of his day. Strangely, after playing alto for a couple of years in the mid-'50s he packed up the horn and seldom played it again. And as far as anyone knows, he never said why (he did play soprano sax in later years). As Zoot never recorded on alto with only a rhythm section, this album is, in that respect at least, historic.

Castro, who thought he might be able to interest record companies in some of the sessions (Stan Getz was another regular visitor), generally had his Telefunken microphones plugged in and Ampex quarter-inch tape recorder running. Considering the source, the sound quality is quite good, the overall balance evenhanded with Castro, bassist Leroy Vinnegar and drummer Ron Jefferson clearly defined. Zoot also comes through loud and clear, complementing but never overshadowing the trio.

Musically, the group doesn’t stray far from familiar territory, renovating five standards and a trio of undemanding Castro originals including two blues. There are one or two awkward moments when everyone is searching for the proper groove and tempo, but they are of little consequence in a session that swings as hard and consistently as this one, thanks mainly to Zoot’s inability to do anything less, regardless of time, place or crewmates—which is not meant to suggest that the supporting cast, especially bassist Vinnegar, is less than admirable.

“Zoot was a joy, a groove to be with,” says Castro, who has lived in Las Vegas since 1980 and still jams at home whenever he can. “He was a wonderful guy, unpretentious, and played his ass off”—on alto as well as tenor, as Castro’s Ampex bears witness. We’ll not see his like again, and Live at Falcon Lair documents one of those occasions when Zoot was happiest—relaxed, swinging, and clearly having great fun deconstructing and reassembling musical scores and swapping ideas with like-minded companions.

A Night in Tunisia; Pennies from Heaven; I