Bill Evans: Live at Art D'Lugoff's Top of the Gate 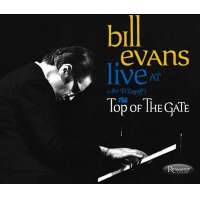 The two-CD Bill Evans Live at Art D'Lugoff's Top of The Gate—a never-before-released recording of the Bill Evans Trio made over 50 years ago—consists of two sets recorded by then-college student George Klabin in the New York City club, October, 1968. Until now, the music has only been heard on a Columbia University radio show; now, Klabin has taken the tape out of the closet and released it on Resonance Records, the label he heads. Crisp and clear, the sound has weathered the years.

The lineup that night consisted of three musicians in their prime: Evans, bassist Eddie Gomez and drummer Marty Morell. Evans had, reportedly, kicked his drug habit during this period, and this was thought by many to be his most stable and, certainly, longest-lasting group. This trio was together until 1975. The CD shows Evans in both swinging and contemplative modes and highlights the trio's superb interaction. Gomez had been with Evans since 1966, while Morell came aboard in 1968; Gomez was a master improviser, while Morell was an energetic, straight-ahead drummer, always keeping the trio on track. Along with the leader, both contribute masterful solos here. Each disc features one complete set, including two versions of three songs. There is one original; the rest are jazz standards and familiar show tunes.

Among an array of standouts, "Round Midnight " is given an assertive approach, with heavy chords for punctuation, in the manner of its composer, Thelonious Monk. Evans, though, delivers it in his own unique way, driven by Morell's extroverted drumming. A revved-up version of "Autumn Leaves" features a tasty bass solo and is spiced by the leader's swinging piano. A lilting "Someday My Prince Will Come" starts out coolly as a ballad, before becoming a fiery foray. Surprises abound in Evans' approaches, such as his unconventional treatment of the old Al Jolson favorite, "California Here I Come."

To be sure, there are the trademark elegant Evans' takes, particularly on "My Funny Valentine" and "Emily." We can be thankful, indeed, that Klabin had the foresight to pack away these tapes to be opened now. This package includes a 27-page booklet, some vintage photographs and essays by producer Zev Feldman, jazz critic Nat Hentoff and vibraphonist Gary Burton.

CD1: Emily; Witchcraft; Yesterdays; Round Midnight; My Funny Valentine; California Here I Come; Gone With The Wind; Alfie; Turn Out The Stars. CD2: Yesterdays; Emily; Round Midnight; In A Sentimental Mood; Autumn Leaves; Someday My Prince Will Come; Mother of Earl; Here's That Rainy Day.