By Joel Roberts
December 3, 2003
Sign in to view read count 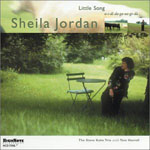 There's a lot to be said for experience. That may be especially true for singers. The knowledge of how to get inside a song and really convey the meaning of a lyric isn't something most younger singers, even those with pretty voices (and faces) can do with the skill of a seasoned performer like Sheila Jordan, who celebrated her 75th birthday with a fine new release, Little Song, and a grand two-night stand last month at the Jazz Standard with Steve Kuhn's trio.

Jordan's voice itself is limited, even fragile at times, but she knows how to make each song her own by playing with melody, phrasing and tempo. And while decades of struggle in the jazz trenches have lent a wisdom and authority to her singing, she's retained a playfulness and sassiness that's hard to resist. Listen, for example, as she purrs and flirts her way through chestnuts like "Hello Young Lovers," "Autumn in New York," and "When I Grow Too Old to Dream." More than just a standards singer, Jordan's also an accomplished improviser, as she proves on Charlie Parker's "Barbados" and the pair of Native American chants that open and close the set.

With sympathetic backing from Kuhn's fine trio and special guest Tom Harrell on trumpet and flugelhorn, Sheila Jordan shows that jazz, like so many other things, only improves with age.

Little Song/Blackbird; Autumn in New York; Barbados; On a Slow Boat to China; Hello, Young Lovers; Fairweather; Something's Gotta Give; If I Should Lose You; The Way He Captured Me; Deep Tango; The Touch of Your Lips; When I Grow Too Old to Dream; Little Song.