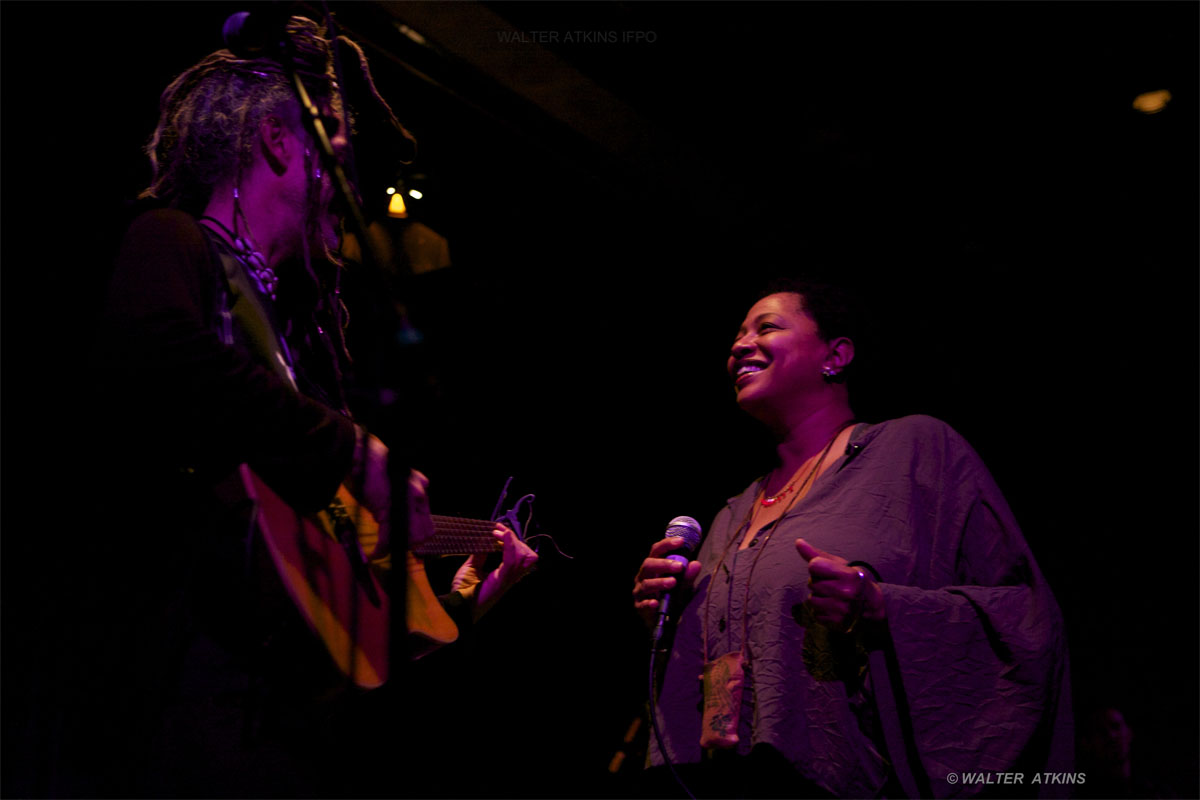 Both Thursday night shows for Lisa Fischer and Grand Baton were packed and the enthusiastic house was treated to a memorable evening of great music. Acclaimed vocalist Fischer dimmed the lights and started the second set with the somber "Breath of Heaven" that miraculously transformed Yoshi's into a small church and the audience into an attentive congregation. Now we were in a first row pew listening to a moving hymn sung with serene grace.

When the captivating spiritual was concluded, the house lights came up and Fischer got comfortable. She kicked off her jeweled sandals and said ..."need a little sparkle" in life while she continually flowed and moved on stage throughout the evening. On "Don't Let Nobody Drag Your Spirit Down," Fischer's dazzling voice was a precision instrument she skillfully wielded to encompass the full spectrum of emotions. Her unique twin microphone approach was on full display as she soared and dived through the song about determination and fortitude. Guitarist/bandleader Jean-Christophe Maillard contributed a stunning solo to hearty applause from Yoshi's patrons. An appreciative fan raised her arms and gyrated her hands during the number and through most of the set.

Fischer's went into her 1991 Grammy-winning classic "How Can I Ease the Pain," from her debut album So Intense. "Ease" was her signature song and this hypnotic arrangement held the house spellbound. People responded with an uproarious standing ovation at its end. During the evening, the popular songbird said to the crowd, "I love you guys." The Cooley/Blackwell standard "Fever," popularized by Peggy Lee, was performed in sensual Fischer fashion and was well received.

The evening's set took a strong rock centric turn. Having regularly toured with the The Rolling Stones for years, the seasoned Fischer featured some of their classics, "Satisfaction" and "It's Only Rock 'n Roll." These songs not only rocked, they curled and stretched in Fischer's talented hands. In these versions, the multi faceted artist glided smoothly and comfortably through them and across the stage.

1985's "Addicted To Love " by the late Robert Palmer was given special attention with Carroll's bass and another Maillard soaring guitar solo. When "Addicted" finished, Fischer and the band earned another standing ovation. After introducing the band members, Fischer commented ..."we have great veggies here in the Bay Area." She added with the California drought, you had to be careful drinking the water.

Thursday night closed with another Stones' staple "Gimme Shelter." The front row fan was still constantly gyrating her arms and hands to the music. One moment the consummate singer was belting the lyrics, and in the next, she was softly imploring her enthralled supporters to sing the chorus with her. Carroll's brisk upright bass solo was featured and Milliard joined in on the keyboards. During the number, Fischer asked this writer "Do you sing?" After respectfully replying "No," I did confess to singing "tenor in the shower." She asked the energized crowd if someone could sing. A listener in the now standing audience betrayed their friend and yelled out this guy can sing, while nudging the unsuspecting man forward. Reaching the front of the stage, the reluctant singer promptly hit and sustained the note perfectly. The impressed crowd clapped and cheered for the humble volunteer, Arrik Weathers, a local real estate professional.

Virtuoso Lisa Fischer and Grand Baton brought the Yoshi's gallery to its collective feet several times during their exhilarating performance. This was an evening of music that easily embraced and celebrated rock, soul, pop, and gospel genres with Lisa Fischer's imaginative instrument.