BY EYAL HAREUVENI
April 8, 2013
Sign in to view read count 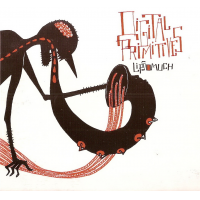 This is only Digital Primitives' third recording, released four years after Hum Crackle & Pop (Hopscotch), but the trio sounds as if its three members have been playing together for ages. This double disc is comprised of two sets—Lipsomuch and Soul Searchin'. The trio—reed player Assif Tsahar, multi-instrumentalist Cooper-Moore and drummer Chad Taylor—have created their own aesthetics: concise, collaborative storytelling compositions, respectful for the blues and modern jazz legacies but fascinated by rock, folk and world music, inventive and imaginative in its sound vocabulary but always with rooted in an effective rhythmic envelope.

Few of the compositions on Lipsomuch demonstrate the trio's unique methods. "India" attempts to find a meeting place between psych country-blues and modern jazz, where Cooper-Moore's self-invented banjo, the diddly bo, balances Tsahar flights on the tenor sax, while Taylor disciplines it in a gentle, funky groove. "Ballad for Butch" is an intense and powerful piece, driven by the the tough rhythm dictated by Taylor and Cooper-Moore, now on his self-invented bass instrument, the twinger. "Flat Footing" features Tsahar on the African thumb-piano, the m'bira, and is an arresting exploration of new and invented world music traditions. Taylor's infectious drumming pushes Tsahar and Cooper-Moore on "Drunken Fools."

Soul Searchin' continues where Lipsomuch ended. "Ol' Blu" is a soulful and moving blues. The title piece is the freest piece on both discs, muscular, raw and confrontational. The rock steady drumming of Taylor on "Spider's Sap" ties Tsahar's passionate, soaring sax flights and Cooper-Moore's tough twinger playing in a focused rhythmic structure. "Talking in Tongues" is the new world music here, a weird yet arresting interplay of Tsahar's soft sounds produced from the m'bira, Cooper-Moore's buzzing mouth bow and Taylor's clever strokes and knocks on the cymbals.

Digital Primitives, again, find its own common ground between the old and the futuristic, the traditional and the inventive, the intuitive and the disciplined.