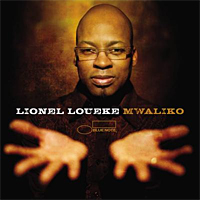 An album of duo and trio recordings, Mwaliko is the kind of world-infused smorgasbord that only guitarist Lionel Loueke could cook up—it contains hard swing, makossa, balladry, Beninese folk and a jazz standard. Hailing from Benin in West Africa, Loueke boasts a curriculum vitae whose scope is similarly impressive. Spanning more than a decade, and starting with bicycle chain-strung guitars in Benin, he completed formal music study in Ivory Coast and the American School of Modern Music in Paris before earning scholarships to study jazz at Berklee and the Thelonious Monk Institute in Los Angeles.

But more important than prestigious institutions, Loueke's stepping-stone journey through musical training is refreshing given the landscape of the music industry today. Interviews detail his preference for study and practice rather than gigs during these early years. This was not because he was incapable of performance, but because he needed the utmost information first: only after a total understanding of where an instrument had been could he focus on where to take it next. So he spent 13 years doing just that. Deliberate and patient, Loueke's sponge-like existence of immersion and absorption—and the discipline that this demanded—evokes the legendary asceticism of another jazz musician, saxophonist John Coltrane.

On Mwaliko, his sophomore effort for Blue Note, Loueke continues to squeeze. As he explains, Mwaliko is an "invitation" (literally, in Swahili) to both his collaborating musicians (there are six) and to listeners. A funkified take on the Cameroonian makossa anthem "Ami O" opens the album and would make The Meters proud. Singer Angelique Kidjo lends her set of immortal pipes to the track, raising neck-hair and giving goosebumps throughout. Replacing the prominent horn section of the Bébé Manga-popularized version of the 1980s is the Loueke afro-orchestra: a one-man dynamo of lip-smacks, bass-slaps and melody, all delivered with a mouth and a guitar.

One of three trio cuts on Mwaliko, "Griot," is the most overt blend of Loueke's past and present: chunky, kora-like guitar and harmonies inspired by his native tongue transition into the voicings of hard swinging modern jazz. Aptly named for the griots in West African countries, these troubadour-historians use poetry and music to preserve oral traditions, perhaps inspiring Loueke to capture his own musical history with this tune.

Also joining Loueke for two duets is Esperanza Spalding, the bassist, composer and singer/songwriter who President Barack Obama personally selected to perform at his Nobel Peace Prize ceremony. Lilting above tongue-clicks and an upright bass backbone, Spalding's scat-lyric delivery weaves voice and instrument into a percussive duet on "Twins." The most grooving tune on the album, "Flying," is the ultimate exhibition of the percussive palette that colors Mwaliko, especially when considering that nothing was overdubbed. But it is more than just a tight groove: for all its complex interweaving, it plays as an instinctive duet.

A fitting choice given Loueke's rhythmic inclinations, "Nefertiti" is the lone standard on the album. A duet with drummer Marcus Gilmore, its inclusion is perhaps more significant than its content: in preceding "Vi Ma Yon," a traditional Beninese song of unknown origin, it showcases the musical mélange that is Mwaliko.

When an artist like Loueke releases an album like Mwaliko it seems logical to advocate for a careful ascension of the music industry. But in today's world, the next pop superstar can be determined on a nightly basis by fan voting: tank it on Tuesday and you might not make it to Wednesday. Take the Pop Idol series. Thanks to ballooning television ratings and exposure, if an aspirant artist performs well in Pop Idol, a record deal will be waiting. Perhaps the most powerful indicator of a world that covets overnight success: Idol series spin-offs now air in 42 territories and are responsible for 148 worldwide winners.

The reality is that Lionel Loueke's musical journey may be the tortoise to the hare of fifteen-minutes-of-fame-driven albums. But maybe that just means it's only a matter of time until the patient and deliberate tortoise wins.