By MARK SULLIVAN
December 15, 2017
Sign in to view read count 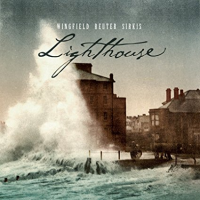 The trio of Mark Wingfield (guitar), Markus Reuter (touch guitar) and Asaf Sirkis (drums) gathered at La Casa Murada Studios in Spain in February, 2016 to improvise the music on this album. There was so much creativity in the air that bassist Yaron Stavi asked to join them for another session—The Stone House (Moonjune Records, 2017)—which was recorded second, but released first.

This might make Lighthouse seem anticlimactic, but it definitely is not. The music these musicians made was again improvised, with no rehearsal and minimal editing, and it is just as magical as the quartet recording. If anything it is even more expansive, with greater contrast between driving rhythms and ambient soundscapes. In the absence of a bassist it is reasonable to ascribe bass lines to Reuter, but it can still be difficult to tell him and Wingfield apart in the upper register.

"Zinc" opens the set with a soaring guitar line over a relentless, jerky rhythm. "Derecho" features a heavy groove from the rhythm section before the entry of a contrasting, pensive guitar line. Sirkis takes a drum solo to end it. "Ghost Light" is the longest track, and the most ambient: even the drums contribute to the soundscape wash. Reuter takes a long, reflective solo, followed by Wingfield.

"Magnetic" opens with a drone that sounds so much like an organ that it's hard to tell who might be playing it. The drums set up a busy rhythmic pattern underneath, and eventually a manic solo emerges (from Reuter, I think)...which just keeps building into an almost incoherent mass. After a pair of shorter tracks (featuring some whammy bar torturing by Wingfield that is reminiscent of guitarist/looper David Torn) the album concludes with the appropriately named "Surge." Driving drums and bass, crunchy guitar, and background textures that sound like more than three people.

Sounding like more than three people is par for the course for this bunch, as well as freely improvising music that sounds like it was composed, or at least rehearsed beforehand. How about a tour so we can hear them in front of an audience?