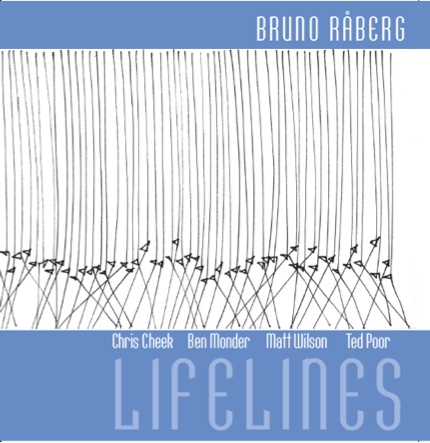 Bassist Bruno Raberg seems to have a restless sense of adventure. He has profiled this over the course of his recordings as a leader where he has shown his ability in making both composition and improvisation relevant to his cause. Both have taken a forward trajectory through his choice of band mates that in the past have included Donny McCaslin, Allan Chase and Ole Mathisen. The tradition continues on Lifelines where Ben Monder (guitar), Chris Cheek (soprano and tenor saxophones), Ted Poor (drums) and Matt Wilson (drums) help him turn the wheels of invention.

Eight of the tracks are improvisations with Poor, Cheek and Monder, equally divided on the two CDs that Raberg calls the "Blue Disk" and the "Red Disk." The improvisations are a study of the understanding between the four. The ideas flow from one to the other, are developed with a compact logic that never strays from sensibility.

Raberg is the protagonist on "Eruption," where he works up the tide with the high flying tempo of his bowing. The churning harmonies are calmed by the temperate beat of Poor while Cheek blows his breathy phrases right across the bass lines. The commingling of sound creates an interesting tapestry that testifies to a fecund exchange. Cheek bodies the melody of "Dream Walker" soaking it in the warm tonality of his tenor sax. He lets it find the blues, bringing in a natural extension that is well served by Raberg's pulse prodding and flowing chords from Monder.

A tinge of rock from Monder brightens "An Afternoon by the Meadow." He lets loose a load of riffs that has Cheek diving in with some fiery intonations. Poor adds dollops of color as Raberg burps and whomps along, cutting into the fermenting tide on this entertaining romp.

"Gymnastics/Skyscapes" offers a study in contrast. Wilson jump starts a coruscating rhythm and Raberg goes into a walking line on the bass. Cheek draws the pulse in and then lets it loose. From then on it's a constant shift of time and harmony. And if this was not alluring enough, each player nimbly threads his way into the spaces set by the others is quite astonishing. Empathy is certainly at a high level.

Raberg immerses his compositions largely in the vat of chamber music. This suits the expressionist approach that the band can deliver both individually and collectively. Even in the darker moments there are glimpses of shadow and light as the knob of invention is turned.

Raberg, as may well be expected, comes up with another delectable recording.